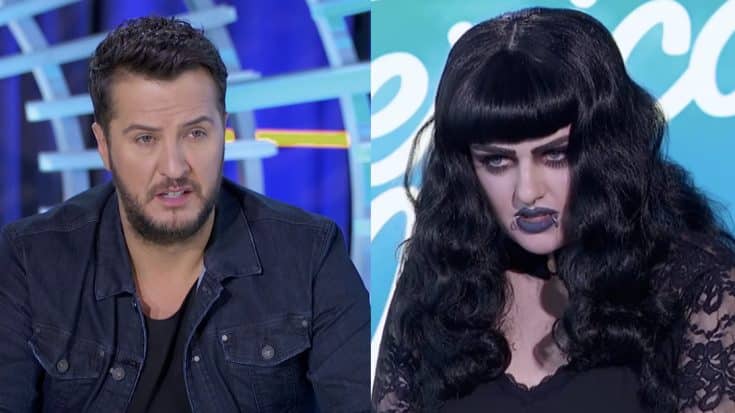 But, one Idol alum pulled out all the stops when she decided to return to the show to prank Lionel Richie, Luke Bryan and Katy Perry with a creepy disguise. The former champ, donned in all black and sporting two lip rings and a nose ring, took things a step further when she got into full character to record a pre-performance package like the other contestants. Her acting skills were so spot-on that everyone was fooled.

“When I walk into that room I really want to bring an energy that the judges haven’t seen before. I am so amped to get in there and sing for them today,” the faux contestant said.

Her wish was granted when she walked into the room and the energy completely shifted as the judges laid eyes on her. Their shocked (slightly scared) faces said it all.

When Luke Bryan asked how she was doing, she remained silent and simply raised her hand, remaining totally committed to her character. Katy Perry then asked the contestant about herself. She replied that she is from Omaha, Nebraska, and goes by Lady Mapo, a name she created in honor of her deceased cat.

“I feel like last year was just really boring,” Lady Mapo said in response to being asked if she’s the next American Idol. “It was just too…American.”

Unsure of how to respond, the judges just looked at each other until Luke Bryan replied, “Nebraska is pretty American.”

Awkward silence ensued until Lady Mapo asked if they were ready for her to sing. As the piano began to play, the singer danced in a circle, causing Lionel Richie to utter, “What the heck is going on?” Lady Mapo then removed her wig, revealing her real identity….last year’s winner, Maddie Poppe.

The judging panel burst into laughter as they realized they had been on the receiving end of an epic prank. Watch Maddie Poppe’s prank unfold in the video below.