By Jennifer Pernicano on March 10, 2022
Advertisement 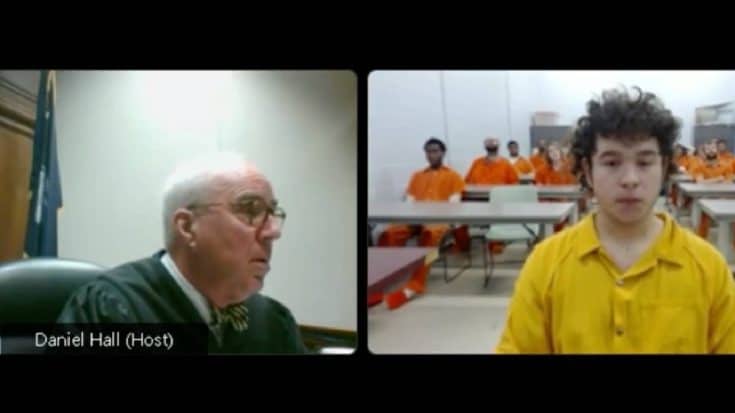 On February 8, former American Idol finalist Caleb Kennedy was arrested and charged with a felony for driving under the influence after he crashed into workshop, which resulted in the death of a 54-year-old man.

According to the South Carolina Highway Patrol, 17-year-old Kennedy was behind the wheel of a 2011 Ford pickup when he turned onto a private driveway shortly after noon and struck a workshop behind the home. 54-year-old Larry Duane Parris was inside the workshop and was killed in the crash.

JUST IN: SCHP working serious crash involving truck that ran off Murph Rd near Brian Rd in Spartanburg and crashed into a building hitting a 54yo man. The 16YO driver isn't being ID'd due to his age. SCHP didn't confirm any charges as of this hour. https://t.co/LyrqOlMRer pic.twitter.com/crPBxbs4Hi

According to WGNTV, who obtained the arrest warrant, Kennedy said he took a “deep draw” from a vaping device, which allegedly had marijuana in it, and then felt its effects while driving, a prosecutor said in court Feb 9. Ryan Beasley, Kennedy’s lawyer, said alcohol was not involved. WGNTV also reports that “the warrant is the first indication that marijuana is part of the prosecution’s felony charge, which carries a sentence of up to 25 years in prison.”

Beasly told the AP, “He was holding the victim in his arms when the police got there. This was obviously a terrible, terrible accident. By all indications is a great student, never been in trouble.”

Kennedy has remained in jail after a judge denied him bond initially and is being charged as an adult. At the time, his lawyer was planning on requesting bond at a later date.

The former American Idol finalist appeared before a judge via Zoom on March 10, where he once again requested to be released to his family. The wife and daughter of the man Kennedy killed were both on the Zoom and made emotional pleas to deny him bond, saying he should not be let out because they fear he will do what he did to someone else.

Pariss’ widow said, “The only reason we are here is because this man made a conscious decision to put something into his body and then consciously got into a vehicle knowing he didn’t need to be driving and came down a dead-end road and came into my driveway. I don’t think he should be allowed to get out and take a chance of doing that to somebody else.”

His daughter added, “For a month now, I’ve laid down and closed my eyes and closed my eyes only to see the same things over, and over, again. My daddy laying in his own shop, moaning and groaning, with a complete stranger. Judge, I have to re-live that day, every day, for the rest of my life. Please explain to me how he has the opportunity to go home. Nothing’s changed between Feb. 8 and today, so why are we even here?”

According to WYFF, “Circuit Court Judge Daniel Hall refused to set bond, saying conditions set by a previous circuit court judge had not been met.”

At the second hearing, the judge did not set bond and said they wouldn’t until results of a state toxicology report came back. Kennedy’s lawyer requested the emergency hearing because he submitted new medical records that showed marijuana was found in Kennedy’s system but no alcohol.

His defense is also saying that Kennedy is  still suffering from the same symptoms he was during the crash: blacking out, dizziness, and more. Beasley is also claiming the detention center is not providing proper care to his client, who was wearing a yellow jumpsuit, signaling he was on suicide watch.

“Caleb is a minor and he’s being given Prozac,” Kennedy’s lawyer said. “And the jail wants to give him more Prozac, but he’s still having the same symptoms that are described at the scene of this accident: blacking out, dizziness and his family, they are obviously worried.”

You might remember Kennedy when he competed on Season 19 of American Idol and wowed the judges during his audition with his original song, “Nowhere.” Judge Katy Perry told the then-16-year-old that he had something special. Lionel Richie praised the teen’s talent, saying he had a “storyteller’s voice,” and later added that he had great expectations for Kennedy. He advanced to the Top 5 before withdrawing after a controversial video was released.