By Jennifer Pernicano on August 31, 2018
Advertisement 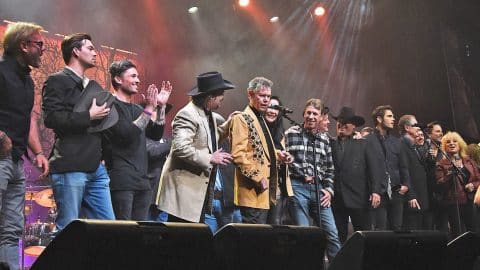 The 30 artists who banded together to pay tribute to country music icon Randy Travis at the tribute concert in his honor taking place at Bridgestone Arena in Nashville, Tennessee joined him onstage in one of the most lively performances you’ve seen from him since 2013.

Garth Brooks, Kane Brown, Chris Young, Josh Turner, Scotty McCreery,  Alison Krauss, Chris Janson,  Travis Tritt, Alabama, and many more joined Travis on stage for an emotional gospel medley of “Amazing Grace” and “Will the Circle Be Unbroken.” To kick off the performance, Mary Travis assisted her country crooner husband in walking across the stage to give a few words prior to his performance of “Amazing Grace” before being joined by the star-studded lineup.

When taken into consideration that just over three years prior doctors advised Mary to pull the plug on her husband following a massive stroke – warning should he wake, he would be confined to a wheelchair for the remainder of his life – his performance is a miracle come alive. While the army of country singers sang backup for Travis, he was no doubt the star of this show, miraculously singing “Amazing Grace” from start to end. However, the show was not over just yet.

After his tear-jerking performance of the Gospel song came to a close, a lively rendition of “Will the Circle Be Unbroken” was collaborated by Travis and his fellow country artists. The spirited performance closed out the lengthy tribute concert which lasted almost four hours.

What an unforgettable night! Thank you to everyone who came out to show support! Without my fans I wouldn't be who I am! THANK YOU

The marathon tribute event featured artists singing a variety of different songs by the great country singer in front of the man himself, with many giving heartfelt dedications prior to their performances.

“There isn’t anybody in country music today or in the last 20 years that doesn’t owe their career to Randy Travis,” said Brooks prior to his performance of “Forever and Ever, Amen.” “You totally saved this music and this format…Anything you ever need from me Hoss, it would be an honor to do. I just love you to pieces.”

A few standout performances include Merle Haggard‘s son, Ben, who performed his father’s “Are the Good Times Really Over” at the request of Travis as well as Turner who delivered a spot-on cover of “Three Wooden Crosses.”

You can watch the emotional star-studded performance in the video below!