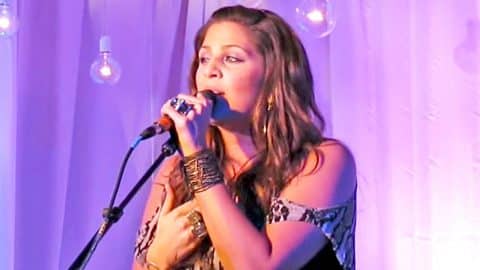 Despite being one of the most popular groups in country music, Lady A always finds the time to make their fans feel special.

In 2011, Lady A took the time out of their busy schedules to host a special performance for their fan club.

The Nashville performance was in an intimate setting, which gave Lady A’s fans a unique experience others can only dream of. In addition to singing some of their own songs, the group also took the time to perform other country hits.

One song the group sang was Sara Evans‘ number one hit “A Little Bit Stronger.”

The performance placed Hillary Scott front and center as the lead vocalist, and she didn’t disappoint.

Hillary’s powerful voice is the perfect match for the inspirational song, which speaks about getting over the pain of a heartbreak, as the narrator sings “Even on my weakest days, I get a little bit stronger.” Early on in her performance, Hillary asked the crowd to join in, and they proceeded to sing along with her for the rest of the song.

At one point when the camera zooms in on Hillary, you can clearly see the emotion on her face, which proves how connected she was to the song.

Her emotion also showed through in her body language and gestures, which further emphasized the power of the lyrics.

Toward the end, Hillary harmonized with her fellow bandmates in a sweet and soft conclusion to her inspirational performance. Tune in below to check it out. It’s so good, it will gives you chills!