How Tuff Hedeman Honored Lane Frost Following His Death, “He Was One Of A Kind” 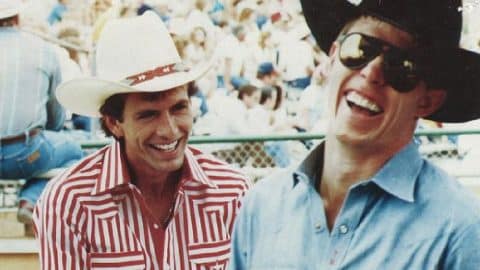 32 years have passed since champion bull rider Tuff Hedeman lost his best friend in a tragic rodeo accident. Fans of the movie 8 Seconds likely remember the story well, but many fans have wondered what happened to Tuff in the years since.

Hedeman and Frost were two of the hottest bull riders on the PBR circuit in the 1980s. Known for their fearlessness and ability to ride bulls others had failed to master, the pair were set for long, successful bull riding careers. But, Frost’s dream came to an end
on July 30, 1989.

Frost was just 25-years-old when he settled atop the bull named Takin’ Care of Business at the Cheyenne Frontier Days rodeo. After finishing an 8-second ride, Frost dismounted the bull, but the animal charged the rider and hit Lane’s back with his horn, breaking several ribs. The blow caused internal injuries that led to Frost’s death almost immediately. As Frost fell to the ground, he reached toward Tuff Hedeman who was watching from the other side of the fence.

Five days later, Frost was laid to rest in Hugo, Oklahoma. More than 3,500 friends, family and fans of the beloved rodeo star gathered to pay their respects that day, but few honored Frost like Tuff Hedeman did five months later.

Hedeman was on track to win the 1989 World Championship at the National Finals Rodeo in Las Vegas. When it was his turn to take his last ride of the event, Hedeman mounted his bull and went for the ride of his life. When the 8-second bell rang, Tuff kept riding….for another 8 seconds.

The crowd rose to its feet when they realized that Tuff was riding for Lane. ”It was the only time I’ve gotten off a bull with tears running down my face,” Hedeman said following the ride.

In a recent interview, Tuff Hedeman recalled the tragedy that took his best friend’s life and the moments following when Tuff joined Frost in the ambulance and watched doctors try to revive him at the hospital.

“It’s something you just don’t get over. I’ll never be over it,” Hedeman said. “I was better in every way because of him. He was pretty much the one that taught me…you’re supposed to be nice to people. He was gold.”

Hedeman retired from bull riding in 1999, but did so with three PRCA Bull Riding Championships, one PBR World Championship, and eight Hall of Fame honors to his credit.