Hunter Praised For How He Dealt With An Angry, Charging Bear

By Manly Bryant on November 29, 2022
Advertisement 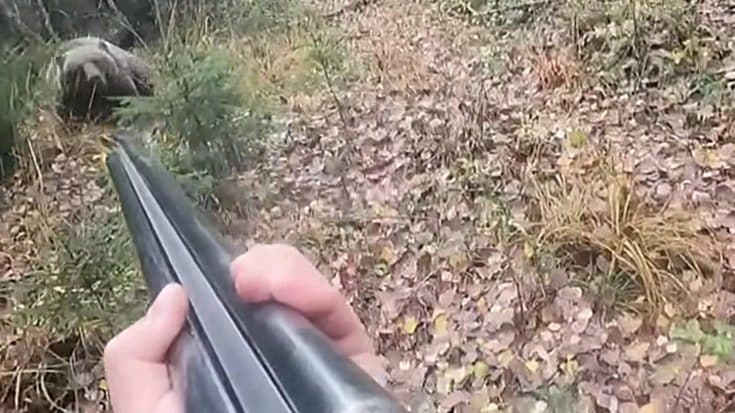 A wild, heart-pounding video shows the moment a Russian man came face to face with a charging brown bear in the middle of the woods while he was holding a shotgun.

The video was posted to Reddit by user @freestudent88 where many people praised the man for his ability to stay as calm as he did during the intense and terrifying situation.

The footage shows the man breathing heavily as he’s looking through the woods and sees a really big brown bear on a trail ahead of him. The man was a hunter and his hunting dogs can be heard in the background barking at the beast as it chased both him and his pet around the woods.

The man holds his shotgun up to the bear’s face as the bear comes charging at him, getting within mere feet of him before deciding to turn around and run the other way.

The bear bluff-charged him a couple of times as he slowly backed away keeping his aim on the apex predator. People in the comments said the hunter did not shoot the bear because he only had one shot and if he missed or didn’t hit the bear in a fatal way, it could just piss the bear off even more and turn things into a worse situation.

Plus it was a mother bear just protecting her cubs and bluff-charging him so he believes he made the right decision.

In the video, the man says in Russian, “There’s a female bear with three cubs here. I decided not to shoot. Leaving now.”

One of the people commenting on the Reddit video said, “That’s the REAL reason why he held off firing. He wasn’t showing discipline, he just knew that he would never have time to reload if he fired both barrels and didn’t kill the bear.”

“He knew that he didn’t have the optimal weapon for taking the bear down, so if he was going to fire it was going to be both barrels at point blank range,” another wrote.

Another person noted, “This wasn’t him trying to save the bear, it’s him making sure that if/when he fires, it’s up close and deadly. He knew what he was about.”

Another chimed in, “Balls of steel but did the right thing.”

One said, “That guy kept his cool to an impressive degree.”

And lastly, one wrote, “I would’ve pulled on charge number three tbh. What a guy.”

The bear’s cubs were never seen in the video, however, the hunter’s dog was seen running from the bear as it chased it through the thick forest.

Watch The Intense Bear Footage Below