‘Idol’ Contestant Botches ‘Don’t You Wanna Stay’ Duet, Asks Judges To Give His Partner A Chance 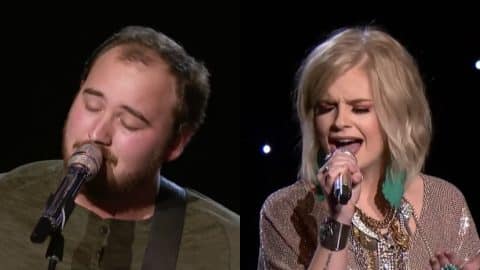 For the first time in American Idol history, the iconic talent show is foregoing group rounds during Hollywood Week. Instead, contestants are performing duets, much to the dismay of some and the delight of others.

During Sunday night’s Idol episode, one duo showed just how frustrating it can be when one doesn’t click with their partner. They also showed how honesty and humility can sometimes lead to a second chance.

Madison Paige and Peyton Aldridge teamed up for a cover of the Jason Aldean and Kelly Clarkson hit “Don’t You Wanna Stay.” But, the duo’s performance was full of drama. When Peyton failed to meet with Madison at the designated time to choose their song, Madison chose without him.

Footage showed Madison wandering around looking for her duet partner when advisor Bobby Bones found her and asked what was going on. “I can’t find my partner. Like, he has not been up here,” Madison replied. “Not being able to find Peyton really bothers me. Not having someone here to practice when we need to be practicing.”

Together, Bobby and Madison went searching for Peyton. When they found him leaving his hotel room, he responded that he had gone to the convenience store for chicken wings.

“I’ve been in my room eating chicken wings. I went to the store and got some chicken wings. I was very hungry,” Peyton said before adding that he was upset that they didn’t have any ranch dressing. “I’m not used to all this cauliflower.”

The pair finally got down to business and began to rehearse. But, after some last minute changes before taking the stage before Lionel Richie, Luke Bryan and Katy Perry, the performance got off to a rocky start. Madison was visibly emotional knowing that she was at risk of being sent home. But, her partner came to the rescue and took responsibility for the fact that they weren’t well-prepared.

The judges applauded Peyton’s heart and chose to give both of the singers a pass to the next round. “We’re very touched by your humility, your honesty. So, my fellow judges and I have decided to give you a second chance. You’re both going through.”