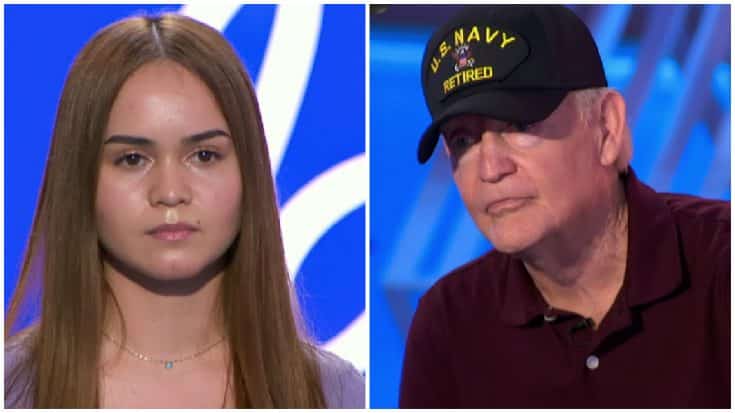 No parent likes to see their child hurt or rejected, but one American Idol contestant’s dad took his frustration to a new level during Sunday night’s Idol premiere.

Danica Steakley from Gulfport, Mississippi, took her turn in front of returning judges Lionel Richie, Katy Perry and Luke Bryan and performed Hank Williams’ “I Can’t Help It (If I’m Still In Love With You).” The 17-year-old was accompanied by her father, 73-year-old retired U.S. Navy Lieutenant Dan Steakely.

Danica’s talent was evident, but it wasn’t quite enough to earn her enough votes to go through to the Hollywood round.

“You’re very talented. But, you’re 17 and I think you can kind of hear it in your voice a little bit…the lack of experience. There’s a bit of timidness or shyness in delivering,” Katy Perry told the singer.

Lionel Richie told Danica that she had a fantastic “high end” but “got lost” on the low notes. “You’ve got the goods. I just think it’s timing and a little bit of experience.”

Luke Bryan addressed Danica’s dad, saying, “Dad, I know this is probably quite frustrating to hear.” He then turned his attention to the teen and added, “You have all the makings to grow into a really great singer. The best thing for you is to get out there and gig and play, because you’re 17 and it may be one of those scenarios where you’re not quite ready to tackle this competition.”

The camera showed Danica’s father on the sidelines showing signs of frustration as the judges spoke. When Luke Bryan didn’t vote to send Danica through, her father audibly sighed and hung his head. Katy Perry agreed that Danica needed more experience, but voting for her to move on and get around some of the other singers in the competition. But, ultimately the teen didn’t advance after Lionel Richie failed to give her a “yes.”

As soon as it was evident that Danica wouldn’t be moving on to Hollywood Week, her dad stormed out of the audition room and instructed her to follow. When the show’s host Ryan Seacrest tried to stop him to talk, Dan verbalized his frustration with the judges, saying sarcastically, “We just need some more time…timing…da da da da. Why didn’t they just say no right away?”

Danica handled the rejection well, saying, “I’m disappointed, but as a singer you have to take criticism well and I understand that.”

But, Dan got the final word on his way out the door. “I don’t even know any Luke Bryan songs anyway…besides ‘Knockin’ Boots’. Next time I’ll have her audition for The Voice.”