Jennifer Nettles Puts Her Own Twist On “Bohemian Rhapsody” 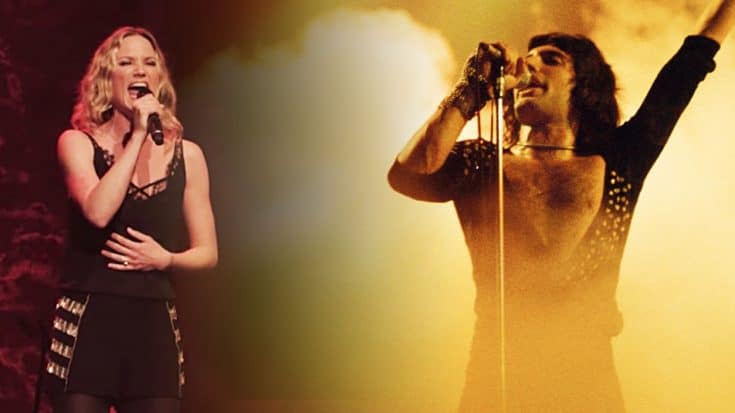 While we’ve all tried to cover it on karaoke, it’s fair to admit that Bohemian Rhapsody is hands down one of the hardest songs to cover. For an artist to even attempt it is often considered ludicrous. But Jennifer Nettles stepped up to the challenge and it is an experience you can’t miss.

The performance begins with the room completely dark and a subtle countdown “1…2…3…” then suddenly chills will run up your spine as she opens with the famous line, “Is this the real life…”

The crowd goes absolutely nuts when they realize they are in for the treat of a lifetime. For a country artist to take on Queen’s 1975 chart-topping international hit is unheard of. The ground-breaking song has defined an entire generation and according to Rolling Stone, “cannot be overstated.”

What era do you think this was taken? ?

Most people would shy away from even attempting to tackle Freddie Mercury’s “mock-opera” rock ballad, but Nettles took it head on. The strength behind her powerful vocals filled the concert hall as the crowd quickly went from hootin’ and hollering to complete awe-struck silence.

With the audience hanging on the edges of their seats, Nettles puts on an epic production of grand proportions. Her band adds an element to the song that allows her to meet the demanding opera-like nuances of the song.

Throughout the entire performance, you can feel the passion in her voice. There is such an unreserved emotion to her voice as she cries out “Did you think you could love me and leave me to die?” that your soul almost breaks in two.

Finally, the complete silence from the audience is broken as they explode into cheers when she grasps onto the last note, letting it fall over the crowd like a slow-burning ember.

Nettles’ performance proved that she is not only a country music heavyweight, but she can also provide an electric head-banging good time.

Watch Jennifer Nettles’ performance below and prepare to be blown away.