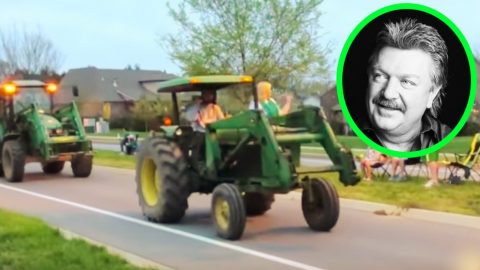 On March 29, country music lost one of its icons…Joe Diffie.

The 61-year-old Grand Ole Opry member passed away due to complications from COVID-19 (coronavirus). His family announced his passing through a statement on social media.

It’s with a sad heart that i have to post this. Tara

Tributes from grief-stricken fans and artists came pouring in immediately after news of Joe’s passing was made public.

Because of the COVID-19 pandemic, News 4 reports that a traditional funeral service for Joe would not be possible, per the CDC’s guidelines. But his friends and neighbors still found a way to honor him while also adhering to the practice of social distancing.

They had a parade.

Those who loved and cared about Joe gathered in his neighborhood in Nolensville, TN to host a drive-by parade in their respective cars, trucks, and tractors.

Of course, there were plenty of John Deere tractors to be seen, since one of Joe’s biggest hits was “John Deere Green.”

News 4 reports “hundreds of vehicles showed up” to drive the parade route in Joe’s honor, including police cruisers and fire trucks. The people in the various vehicles were all “blasting” their favorite songs of Joe’s as they drove through the neighborhood.

The outlet got the chance to speak with some of Joe’s friends and neighbors in attendance at the parade. Mick Hill, a longtime fan of Joe’s, says he was “crushed” to hear he passed away.

Lisa Garromney, a friend of the Diffie family, described her response to the news of Joe’s death as being one of “shock.” She went on to describe the type of person Joe was.

“Joe…was just a regular guy,” she said. “And he never made you feel like you were hanging out with a country music star.”

The turnout at the parade in Joe’s honor makes it clear how beloved he was by his friends and neighbors. You can watch a spectator-filmed video of the parade below.

Our hearts and prayers go out to Joe’s family and friends during this sad time.