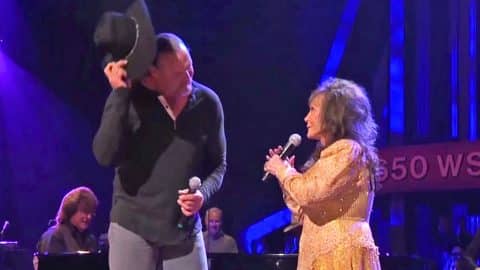 On September 25, 1962, one of country music’s greatest artists of all time was inducted into the Grand Ole Opry.

The one and only Loretta Lynn continued to entertain packed crowds at the Opry every time she made an appearance there. Sadly, she hasn’t been able to sing at the Opry for some time due to a series of health setbacks she experienced in recent years.

But Lynn was still in good health in 2012, and was able to attend a special event held at the Opry in her honor.

To celebrate Lynn’s 50th Opry anniversary in 2012, the Opry hosted an extravagant show, and she was the star. But someone else who had the chance to step in the spotlight that day was Lynn’s fellow Opry member Trace Adkins, who joined in 2003.

Trace Steps In For Conway

Adkins paired up with Lynn on stage for a duet on one of her famous songs with Conway Twitty.

Called “Lead Me On,” Lynn and Twitty released the song in 1971, and it was a number one hit in both the U.S. and Canada. Today, it is known as one of the duo’s most recognizable duets.

Taking Twitty’s part, Adkins turned on the charm as he sang to Lynn, often reaching over to take her hand or wrap his arm around her. Lynn was equally charming, and she dazzled the crowd like she always does.

After they finished singing, the two shared a sweet embrace. You can tell how grateful Adkins was for the opportunity to perform with Lynn.

No country music fan can miss out on this touching performance, so be sure to check it out in the video below!