By Miranda Raye on January 2, 2020
Advertisement 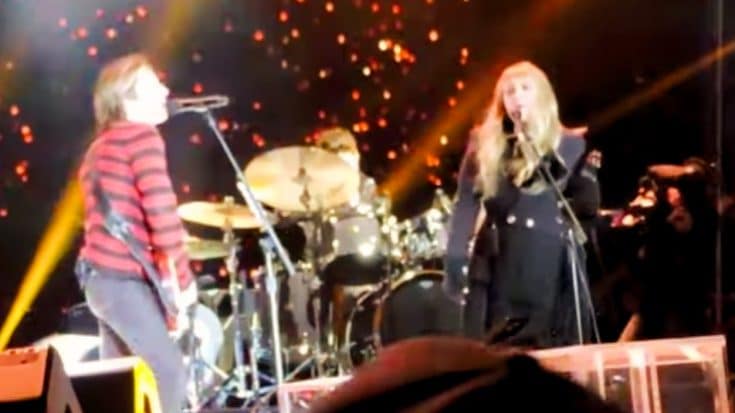 Every year for several years, Keith Urban led Nashville’s massive New Year’s Eve celebration. His performances were often buzzed about for days into the New Year, with his “in memoriam” medleys garnering some of the most attention.

In these medleys, Urban recognized artists who passed away in any given year by performing short snippets of some of their iconic songs. His 2017 medley, which recognized artists such as Troy Gentry, Glen Campbell, and Tom Petty, is his most-viewed, with over 1.2 million views on YouTube.

Speaking of Petty, Urban revisited another one of his works when he performed at the NYE celebration in 2019. Only this time his performance wasn’t part of a memoriam segment, and he didn’t do it alone.

Another special guest who performed at Nashville’s NYE bash was Stevie Nicks. Leading up to the big night, Urban teased the possibility of a collaboration with Nicks when he posted a photo of the two of them together during rehearsal.

Sure enough, when it came time for the show, Nicks stepped out on stage to join Urban in performing her 1981 single, “Stop Draggin’ My Heart Around.” The song was released as the first single off of her debut solo album, Bella Donna, and reached the second spot on the Billboard Hot 100 chart.

“Stop Draggin’ My Heart Around” was actually written by Petty and Mike Campbell for Tom Petty and the Heartbreakers. Record producer Jimmy Iovine got Nicks to sing on it, and Petty sang with her on the chorus and bridge.

The two appear together in a promotional video for the song, which was filmed while they were performing it in the studio.

Urban took on Petty’s role in his NYE performance of “Stop Draggin’ My Heart Around.” He also used the song to showcase his skills as a guitarist.

Fans were thrilled by the performance. Many took to social media to share how much they enjoyed it, including American Idol alums Gabby Barrett and Cade Foehner.

In the year of our Lord 2019, I had the greatest privilege of marrying the fairest lady in the land.
Also we spent the night watching Keith Urban and Stevie Nicks. We enjoyed it!
What did y’all do? pic.twitter.com/wzWLFZVXGK

Now you can witness Urban and Nicks’ NYE performance of “Stop Draggin’ My Heart Around” by tuning in to the video below.