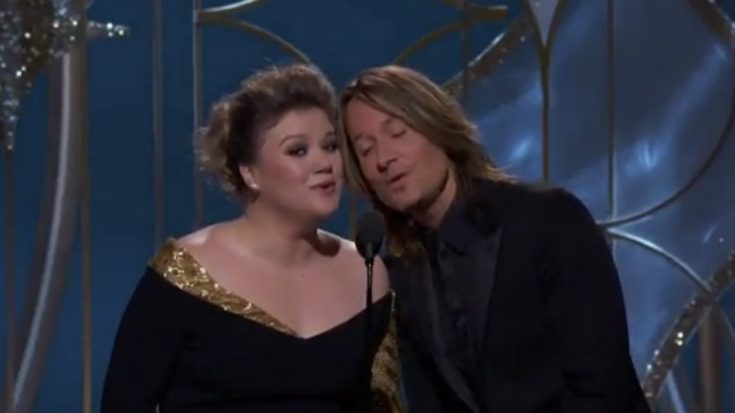 What happens when two of the most amazing singers in the world take the stage together? They sing, of course!

American Idol champ Kelly Clarkson and country megastar Keith Urban shared the stage briefly Sunday night as they presented the Golden Globe award for best original song. Instead of speaking their announcement, the pair chose to sing it in perfect harmony. The simple 6 word phrase “And the Golden Globe goes to….” never sounded so amazing!

Keith Urban and Kelly Clarkson just beautifully announced an award at the #GoldenGlobes and now we all need a proper Keith/Kelly duet ? pic.twitter.com/zy0Mc5a0Ft

Sunday night’s award ceremony was the first for Kelly Clarkson who started the night out with a bang when she had an epic freak out after spotting her idol, Meryl Streep, on the red carpet. The video quickly went viral and became one of the most talked about moments of the night.

Keith attended the awards show with his Academy Award winning wife, Nicole Kidman, who took home the trophy for best actress in a limited series for her powerful performance in HBO’s Big Little Lies.

The mini-duet between Kelly Clarkson and Keith Urban marked the first time the two have performed together, but it’s not the first time they’ve made headlines together. You may recall the famous moment that Clarkson brought the country singer to tears when she performed her emotional song “Piece by Piece” on American Idol in 2016. At the time, Urban explained his emotional response to the performance by saying, “The song, it’s insane. I figure you’re either crying at this performance or you need to check your pulse,” Urban said. “It’s an amazing song.”

In addition to being phenomenal singers, Clarkson and Urban now have something else in common. Clarkson is about to join the ranks of reality singing competition judges, a job that Urban knows well after filling a judge’s chair on American Idol for five seasons. Kelly will be taking her turn when The Voice returns for it’s 14th season in late February.