By Miranda Raye on April 23, 2019
Advertisement 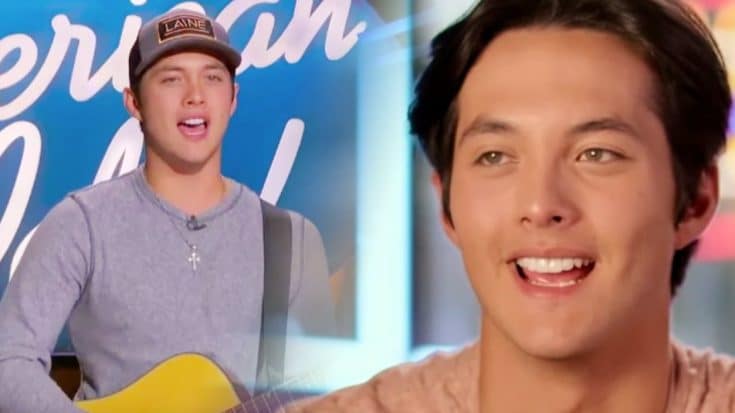 In 2018, a 17-year-old country boy decided to chase his musical dreams and audition for American Idol. He impressed the judges with his performance, and found himself holding a golden ticket to Hollywood as he left the audition room.

Despite his standout audition, viewers didn’t get the chance to know the shy teen that well. He was eliminated fairly early on in the competition, with the judges citing his lack of confidence as the main reason for sending him home.

Today, that same shy teenager is the winner of Season 17 of Idol, and his name is Laine Hardy.

After being eliminated from his first try at Idol, Hardy returned home to Louisiana and focused on strengthening his voice and his sense of confidence. In that time, he released a short album and frequently shared cover videos on his personal YouTube channel.

But although Hardy never gave up performing, he had no plans to return to Idol. That all changed when his friend, Ashton Gill, asked him if he’d play guitar for her own audition in Idaho.

Not wanting to let Gill down, Hardy agreed to come play at her audition, but was adamant he wasn’t going to sing himself.

An Audition Worth Remembering

But the judges, who were surprised to see Hardy there, convinced him to do otherwise. They got him to sing a little bit for them, and they were amazed with what they heard. None of them could believe how strong his voice was or how confident he seemed.

In what has since gone down as an unforgettable moment in Idol history, the judges thrust a golden ticket at Hardy, begging him to participate in the competition as well. He thought about it long and hard before agreeing to do so.

Thanks to his newfound sense of confidence, Hardy had better luck on his second run. Instead of sending him home, the judges sang his praises, and told him how he has the potential to win the whole thing (which he did).

Hardy eventually landed in the pool of Top 8 contestants. As a result, he got to sit down and share a little more about himself for a special episode of Idol.

A large portion of Hardy’s “get to know me” clip showed him at home in Louisiana, where he could be seen fishing and talking about the alligators that hang out in his backyard.

Laine Looks Back On Unexpected Audition

At the end of the clip, Hardy finally took the time to talk about his unplanned second audition, and what he thought about the whole thing.

As he said, “I didn’t know what to think. I had no idea what to do because I didn’t plan for that to happen.”

So even though Hardy had never planned to audition for Idol, what was it that prompted him to finally reach for that golden ticket?

“Can’t say no to Lionel,” he said with a smile, since Lionel Richie was the main judge who encouraged him to take the ticket and give Idol a second chance.

It’s so interesting to hear what was going through Hardy’s mind during that exciting audition! You can hear him talk more about his unexpected return to Idol by tuning in to the clip below.

We’re so glad that Hardy decided to take a chance and give Idol another shot, because he has a talent worth sharing!