Luke Bryan Will Have Y’all Roaring With Chippendales Photo Shoot

By Manly Bryant on December 11, 2018
Advertisement 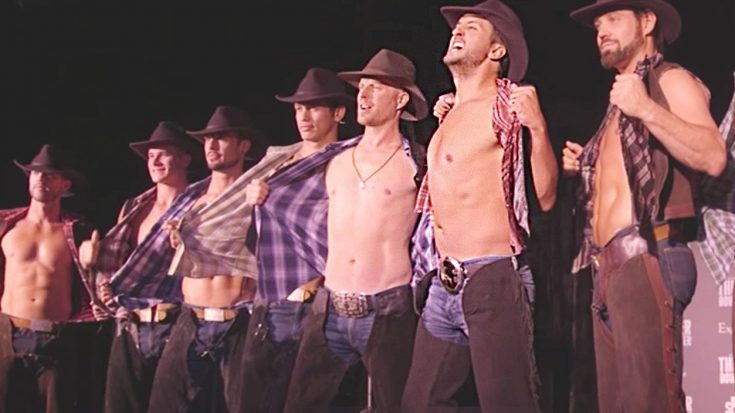 Country heartthrob Luke Bryan had women in an emotional tizzy when he posed alongside a series of steamy men to unveil his country abs and dashing smile. Alongside fellow country star Dierks Bentley, Bryan showcased his intimidating faces and thick biceps for a mock Chippendales photo shoot.

Bentley stood beside his buddy, much more composed and focused as Bryan featured the goofball personality that we know and love. As the cameras begin to flash, the row of cowboys tear off their vests and reveal their phenomenal bodies, prompting Bentley and Bryan to do the same!

As if the steamy shoot wasn’t funny enough – the country stars sported tight leotards and took to an acrobatic ring for some seriously hilarious (borderline awkward) photos. Their Cirque de Soleil debut had viewers in tears at the level of discomfort on Bryan’s face as he grossly demanded to Bentley, “Get off!”

The scene came from a compilation from the outtakes and unseen footage from Bryan’s online series LBTV. The video contains a variety of hilarious encounters involving the two singers, as well as their shenanigans and carefree jokes experienced throughout their time together.

Luckily these two were already close after their time co-hosting the ACM’s back in 2017. We think they make a great (and hysterical) duo!

You can gain an extra laugh by checking out the video below!