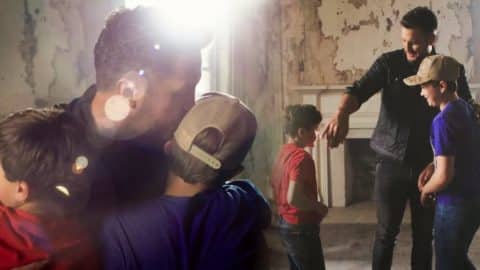 On June 12, 2020 Luke Bryan released one of his most emotional songs to date. Titled “Build Me a Daddy,” Luke began teasing the song on social media in the leadup to its release.

“There are people out there who are going to really, really relate to this song and it’s going to affect them in a beautiful way,” Luke wrote in one Instagram post before the song came out.

There are people out there who are going to really, really relate to this song and it’s going to affect them in a beautiful way. My video for #BuildMeADaddy premieres tonight at 11pm CT. I can’t wait to share it with you guys. Visit the #LinkInBio to join the countdown. Video: @blackmike2309

After “Build Me a Daddy” and its official music video debuted, fans understood why Luke framed the song the way he did.

“Build Me a Daddy” was written by Jake Mitchell, Josh Thompson, and Brett Tyler. In the song, a boy walks past a toy store and decides to go inside to speak to the toymaker. He then gives the toymaker a picture of himself standing next to a soldier, presumed to be his father, and says, “Sir, I’ve heard you can build anything…Could you build me a daddy?”

As the boy continues speaking, we come to the conclusion that his solider father has passed away based on lines such as “I sure miss him. Maybe you could bring him back?”

The boy also tells the toymaker about all the things his dad promised to teach him in the future, like how to throw a curveball.

“I’ve played this song for a lot of my hardcore buddies and it chokes them up,” Luke said about the song on Twitter. “I think that’s the beauty of country music, to really make you feel emotional.”

I’ve played this song for a lot of my hardcore buddies and it chokes them up. I think that’s the beauty of country music, to really make you feel emotional. I can’t wait to share my new song, Build Me A Daddy, with you guys this Friday. Pre-save here: https://t.co/4G00bEtToX pic.twitter.com/g8DG1OOngy

Luke added an extra emotional element to the music video for “Build Me a Daddy” by involving his two sons.

At the end of the clip, you see Luke turn around from the fireplace and smile as his sons, 12-year-old Bo and nine-year-old Tate, come running to him for a hug. Luke embraces his boys and gives Bo a kiss on the head.

You can watch that touching interaction by tuning in to the official music video for “Build Me a Daddy” below. It may be wise to grab a few tissues before you press “play,” because this song tugs at the heart.