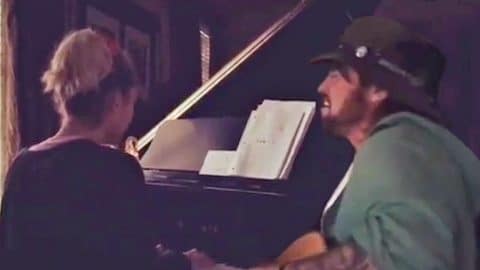 A Long Line Of Music

You could say that Miley Cyrus inherited her passion for music. The former Voice coach has been singing for years, and her father Billy Ray was singing long before that.

Billy Ray found success as a country music star, while Miley has ventured over into the pop genre.

But despite their differences in style, they still manage to make beautiful music together. Back in 2007 they released the heartfelt duet, “Ready, Set, Don’t Go,” which became a Top 40 hit.

If you thought that duet was stunning, then you have to hear Miley and Billy Ray’s random jam session, which Miley shared on her Facebook page some years back.

In a moment Miley described as “magic,” she can be seen seated at a piano and singing, while Billy Ray can be heard playing guitar in the background.

Miley wrote in the caption to the video that they were singing the second song her dad ever wrote, called “How’ve Ya Been.”

Miley starts off singing simple “oh’s” alone, before Billy Ray finally joins in on the main part of the song. That moment when you first hear their voices come together and harmonize is chill-inducing, as they sing about a person who has left them far too soon.

This is one incredible moment between father and daughter that you simply can’t miss out on. See and hear for yourself in the video below.

Who thinks that Miley and Billy Ray should record and release this song together sometime in the future?