By Miranda Raye on March 1, 2021
Advertisement 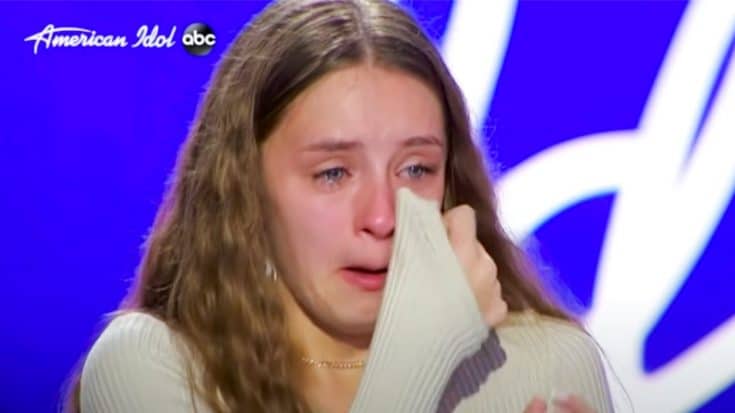 “She’s very excited to be here, but she’s feeling the nerves,” Seacrest told them.

The judges tried to help her calm down before she sang. They had her take some deep breaths and chatted with her for a little bit about who she is and where she’s from.

While you could hear the potential in McGuckian’s voice, her nerves clearly got the better of her. The performance was shaky, and she was off time. At one point, she even flinched when one of the cameras came near her to get a closer view.

After she finished singing, McGuckian began to cry. She surely thought she had blown her audition.

But even though the judges pointed out the faults in her performance, they wanted to give her a second chance. They all got up to comfort her in the hopes she’d be able to shake her nerves and prove what she is truly capable of as a vocalist.

McGuckian sang “Girl Crush” again, and thrived as the judges offered her encouraging comments throughout the performance.

“You have magical things going on, or we would not have dedicated all of that to ya,” Bryan told the young singer after she finished singing again.

The other judges agreed. Even though McGuckian was nervous as could be, they knew she had something special and they wanted to see her succeed.

In the end, all three judges voted to award McGuckian the golden ticket to Hollywood! Hopefully that helps her feel more secure so she can let her talent shine in future performances.

Tune in to the video below to watch McGuckian’s emotional audition and see how the Idol judgs helped her work through her nerves. We wish her the best of luck!