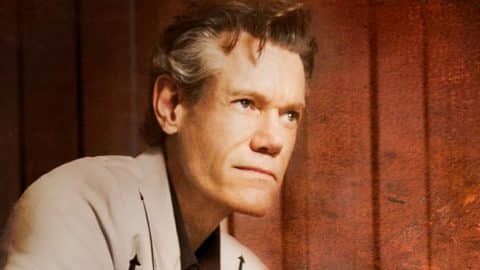 Randy Works To Reclaim His Voice

For decades, Randy Travis was regarded as one of the leading voices in country music. He found fast success in the genre thanks to his unique, baritone voice and his pure country songs.

The hits came rolling in. Today, we know Travis as the voice behind some of country music’s greatest tracks, including “Three Wooden Crosses,” “Diggin’ Up Bones,” and “Forever and Ever, Amen.”

Travis was still an active figure in the industry when his voice was stolen from him in a flash. In 2013, the country singer suffered a stroke that left him unable to walk for some time, and also unable to talk or sing.

Through therapy and rehabilitation, Travis’ condition continues to improve on a daily basis. He can now stand and walk a few steps, can talk, and has even sang a little bit.

During his induction into the Country Music Hall of Fame in 2016, Travis surprised everyone when he stood on stage and sang “Amazing Grace.”

Since then, the country star has participated in a few more musical performances, often singing the closing line of “Forever and Ever, Amen” when other artists perform it in his presence.

But although Travis has made great improvements, he’s still unable to perform or record like he used to. That means that  for the past six years, the world has gone without any new music from him.

However, that all changed in May 2019, when a new song of Travis’ surfaced online. Titled “One In a Row,” the track went unnoticed for a little while following its release. But once people noticed it, the whole world knew about it.

While the song is new to most listeners’ ears, it unfortunately is not a brand-new song that Travis recently recorded. Instead, the emotional breakup song written by Travis’ longtime collaborators Buddy Jewell and Thom McHugh was recorded sometime before his stroke in 2013.

For whatever reason, the song was not made available on a large commercial scale, and was likely only heard by a select group of people until now.

After six years without hearing any new music from Travis, fans were willing to take anything they could get…even if it was an older, unreleased song from years prior.

And based on people’s reactions on social media, everyone can’t seem to get enough of it.

Just in case anyone was in any doubt as to what exactly I like about country music and would like to hear a 'perfect' example of how I like it to sound then go check out the new Randy Travis single One In A Row. #stonecountry

@KlassicMike @ShadowsAriana15 Randy Travis recorded this song before his stroke in 2013, but just released it the other day… god it sounds so goodhttps://t.co/CHKzLJDV5a

Now it’s time for you to hear what all the fuss is about by listening to Travis’ previously hidden song, “One In a Row” in the clip below.

It’s so nice to hear Travis’ voice on a new song again after all these years. We sure have missed hearing him sing…