By Miranda Raye on July 1, 2022
Advertisement 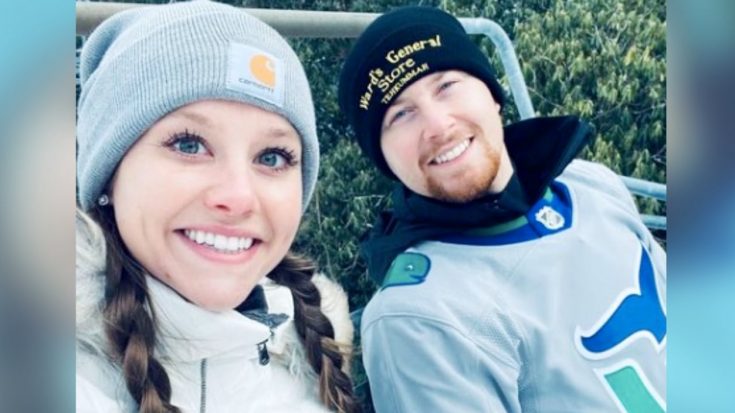 Scotty McCreery and his wife Gabi recently announced they’re expecting their first child. The couple is due to welcome a baby boy in November.

“Baby boy McCreery coming soon!” Scotty wrote alongside a series of photos he shared on social media. The photos show Scotty, Gabi, and their dog, Moose, posing in a field while showing off their son’s sonogram photos and Gabi’s baby bump.

When speaking with PEOPLE, Scotty said he is looking forward to teaching his son how to play all of his favorite sports:

“I grew up playing sports, so getting to introduce him to baseball, which was my first love right there with music, and golf are just little things that [will be great].”

Anyone who follows Scotty on social media has seen how often he wears Patriots gear.

Although Scotty is from North Carolina, his dad is from New England. So he passed his love for his hometown sports teams onto a young Scotty:

“He’s from the very southern tip of Maine – Elliot in the Kittery area – and then Portsmouth, N.H. He grew up a Boston sports fan, so that’s all he knew and he passed that down to me here in North Carolina,” Scotty said. “I’m like the lone wolf, but it’s fun to be a Patriots fan down here because most folks, they’re Pats haters for sure. That makes it more interesting.”

After the Patriots heard that Scotty and Gabi are expecting, they sent Baby McCreery his first jersey. Scotty shared a photo of the jersey on social media, and thanked the team for sending it to him.

That jersey is too cute. We can’t wait to see Baby McCreery wearing it one day!

Hear Scotty talk more about how he ended up becoming a Patriots fan by tuning in to the video below.