By Manly Bryant on March 15, 2019
Advertisement 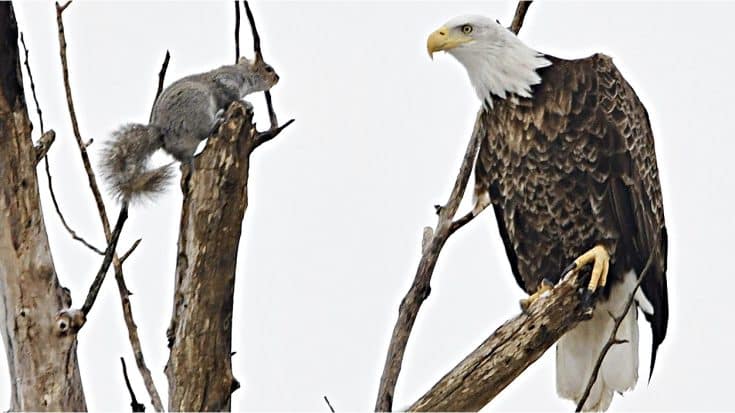 The battle of the beasts! Now here’s something you don’t see every day. A little squirrel going face to face with its number one enemy: the king of the skies, a massive bald eagle.

It happened in the little town of Lincoln, Maine when a professional wildlife photographer of 21 years walked by a crazy commotion in the trees. Looking up to see what the fuss was about, to his amazement, he saw a big, beautiful bald eagle. Luckily he had his camera on him and quickly pulled it out to seize the opportunity of capturing one of nature’s most majestic creatures. However, after looking through the lens, he noticed it’s actually in the midst of a standoff with a mother squirrel!

How The Battle Begins

Apparently the eagle was flying by and landed on a tree where a mother squirrel had her nest of babies in a tree hole. In a desperate attempt to keep her babies safe, the squirrel jumped out of her nest and impressively dashed straight toward the eagle. She climbed all the way to the top of the tree, fearlessly locking eyes with the giant. Take a look at this intense moment captured below.

According to CBS News reports, the eagle thinking it was about to get a quick meal, went on the attack. The squirrel, running on adrenaline, began to climb up, down, and all around – dashing back and forth at the eagle. She even retreated to her tree hole for cover before popping out again to defend her territory and babies.

He said this went on for 10 minutes before the eagle finally got tired of chasing the squirrel and flew off.

What The Photographer Did

Roger Stevens Jr., the photographer, said at the time he didn’t know how the photos were going to turn out but when he got home and loaded them onto the computer he was astonished. Excited about what he captured, he posted the images onto Facebook and that’s when the whole story went viral!

Stevens went on to let everyone know he currently writing a book on eagles and this experience will definitely be included. We’re looking forward to hearing about it in more details!

To keep up to date on all the amazing photos that Roger Stevens Jr. has to share with the world, make sure to follow him on Facebook.