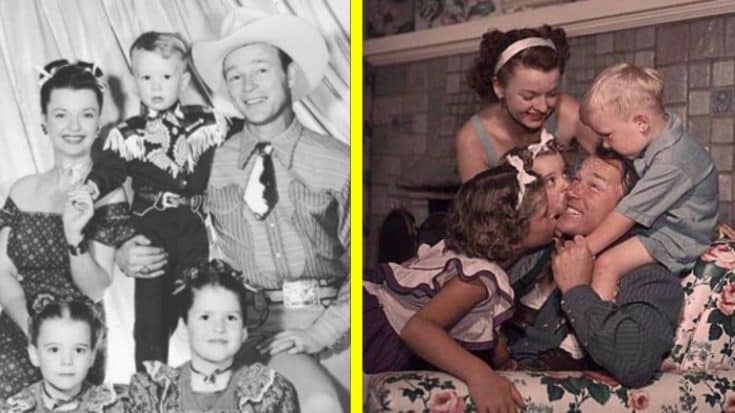 Known as the “King of Cowboys,” Roy Rogers and his wife Grace Arline Wilkins were synonymous with early Hollywood stardom. Between his marriage to Wilkins and his later marriage to Dale Evans, Rogers had eight children. He also helped to raise Evans’ son from a previous relationship.

Rogers and Wilkins adopted Cheryl in 1941 in Texas. While Cheryl appeared in some of her father’s films when she was a child, she’s generally stayed out of the spotlight in her adult life. She’s active in charity work, serving on the Advisory Board of the Western Music Association, and is a participant in the children’s advocacy group Child Help USA.

Wilkins and Rogers celebrated the birth of Linda in 1943. Linda has enjoyed a life out of the spotlight, and enjoys spending time with her many grandchildren at her home in California.

Spent my evening listening to the Sons of the Pioneers and got to meet Roy “Dusty” Rogers Jr.

my grandpas are sure proud right now. pic.twitter.com/8Sd6OyI2G9

Wilkins sadly passed away due to complications during the birth of their only son, Roy Rogers Jr. Nicknamed “Dusty,” Roy Rogers Jr. appeared on The Roy Rogers Show as a child, and went on to become his father’s manager. He enjoyed headlining his band, Roy Rogers Jr. and the High Riders, in the ’80s. For some time, he ran the The Roy Rogers-Dale Evans Museum and Happy Trails Theatre in Branson, Missouri.

Robin was the only biological child of Rogers and Evans. She was born with Down Syndrome and sadly passed away from health complications before she turned two.

Rogers and Evans were visiting a children’s home in Scotland when they heard Mimi sing. They were so impressed, they invited Mimi to come to California to spend Christmas at their home–and Mimi didn’t return to Scotland until she had her own little ones. Today, Mimi enjoys spending time with her grandchildren.

Debbie was adopted by Rogers and Evans after becoming orphaned during the Korean War. Debbie sadly passed away at 12 years old following a tragic bus accident.

John David Rogers, known affectionately as Sandy, was adopted by Rogers and Evans. Sadly, Sandy passed away at 18 years old shortly after entering the U.S.. Army due to a choking incident in a military hospital while he was stationed in Germany.

One thing is clear: the children of Roy Rogers have chosen many different paths in life. That being said, there’s no doubt that being a father was one of Rogers’ greatest joys. His strong support of adoption inspired many Americans to do the same, taking children into their homes to give them the lives they deserve.