“The Voice” Holds Celebration For Its 500th Episode

By Miranda Raye on October 27, 2021
Advertisement 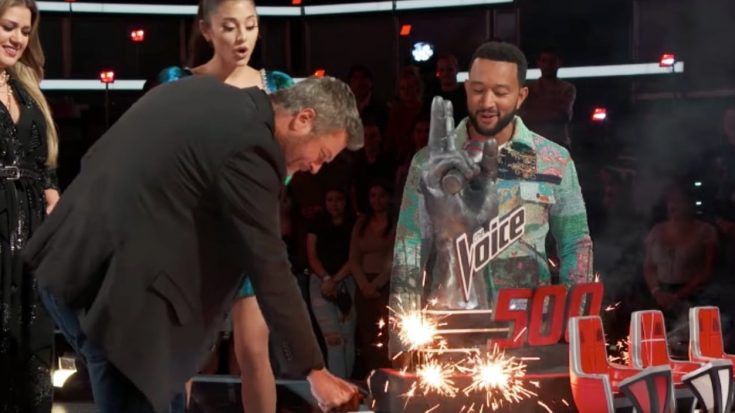 Tuesday night’s (October 26) episode of The Voice was a special one. It was the singing competition series’ 500th episode!

Even though the coaches and contestants were in the middle of the knockouts, The Voice wanted to do something special to honor its milestone episode.

Daly said, “That is, after ten years, we have become the most-watched television show of the decade on a single network.” He then called the coaches up on the stage, as a giant cake was wheeled out to present to them.

The cake resembled the Voice stage (complete with the coaches’ red chairs), and also included a replica of the famous trophy given to the winners.

Shelton spoke with ET about how crazy it is that he’s done 500 episodes of The Voice. He said he and Daly were looking back at old photos from the start of the show, which prompted a hilarious reaction.

“Oh my God, look how young we are,” Shelton recalls thinking when he saw the pictures. “Look how skinny I was back then. What happened to me? That was yesterday.”

Listen to Shelton talk more about the 500th episode of The Voice by tuning in to the video below. The video also includes some clips from earlier Voice seasons. It’s fun to look back on those days!

Have you been watching The Voice since the start? We sure have!