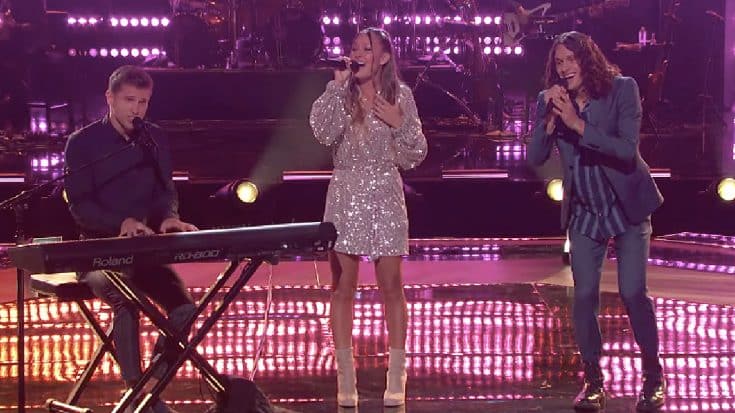 The first night of The Voice‘s season 21 Knockout Rounds took place Monday (October 25) and it brought us a country song cover that we can’t stop listening to.

Prior to their performance, Joshua, Bekah Grace and Caleb Liechty shared why “Wichita Lineman” was an important song for them to cover.

“It’s a song about a really hard-working man, and we relate to this song because [our dad] is a pretty stubborn man,” Caleb said to coach Kelly Clarkson and mega-mentor, Ed Sheeran. “But he’s got this hope.”

Bekah Grace added, “Our family has gotten a lot closer because our dad was diagnosed with terminal cancer. He has such a positive attitude going into every doctor’s appointment. It’s been huge for us to see that.”

There was no hiding that the song was special to Girl Named Tom who delivered a flawless and emotion-filled rendition of the Jimmy Webb-penned song that Glen Campbell took to the top of the American Country Music charts in 1968.

While Holly Forbes’ delivery of the Carpenters’ “Superstar” was jaw-dropping, it wasn’t quite enough for Forbes to keep her spot on Team Kelly as Kelly Clarkson chose Girl Named Tom as the Knockout Round winner. But, the singer did avoid elimination, thanks to coaches John Legend and Ariana Grande who both pushed their button to steal her. Forbes ultimately chose to join Ariana Grande’s team, meaning that we will have the pleasure of hearing her sing again.

Hear the performance of Glen Campbell’s “Wichita Lineman” by Girl Named Tom in the clip below.