By Miranda Raye on September 10, 2018
Advertisement 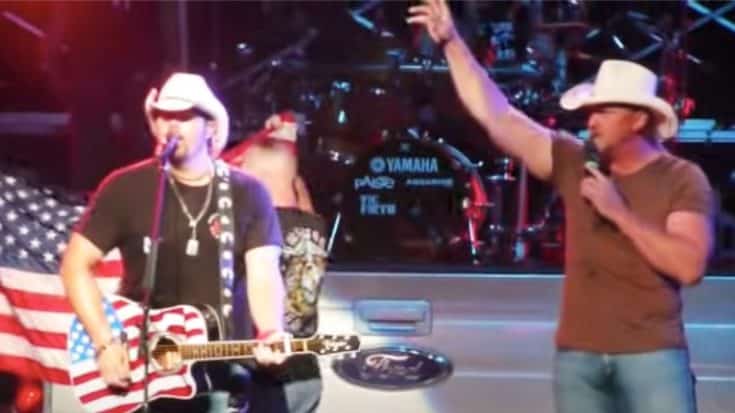 September 11, 2001 is a date deeply etched in the minds of Americans. As each year passes, we reflect on the tragedy that took place that day and remember the many lives that were lost.

After the 9/11 attacks, many country stars reacted in the best way they knew how…through song. One of the most powerful songs to come out of the period following the attacks was Toby Keith‘s “Courtesy of the Red, White and Blue,” also known as “The Angry American.”

The song was not only inspired by 9/11, but by the death of Keith’s father six months prior.

Keith’s father had a strong sense of patriotism and love for his country, which Keith tried to channel into “Courtesy.” His efforts paid off, because the song became a number one hit and is still played at patriotic celebrations today.

Years after the 9/11 attacks, Keith took to the stage to perform the song inspired by that tragic day. But he had a surprise in store for the crowd…there was a special guest waiting to join him.

Eventually, that special guest made his way on stage, and it was none other than Trace Adkins.

Their performance was one powerful patriotic salute to America and its heroes.  We couldn’t think of a better way to honor those killed on 9/11.

Like Keith, Adkins is known for being a proud patriot and strong supporter of the U.S. military. In addition to embarking on numerous USO tours, Adkins often records and releases songs inspired by and in tribute to those serving in the armed forces.

The most recent of Adkins’ songs to fall under that umbrella is “Still a Solider.” The powerful song serves as Adkins’ tip of the hat to all who have served and since returned home, acknowledging how they will never leave the “battlefield” behind them.

If you enjoy “Courtesy of the Red, White and Blue,” you’re sure to enjoy “Still a Soldier” as well. Give it a listen in the video below.