By Jennifer Pernicano on July 1, 2019
Advertisement 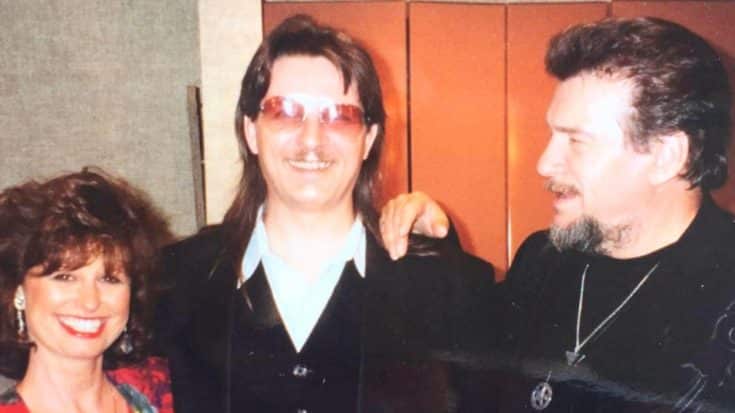 Before Waylon Jennings was an outlaw country legend, he was a bass player in Buddy Holly’s band. He was hired by Holly for the Winter Dance Party Tour, which began on January 23, 1959. Because of the freezing temperatures and the broken heater on their tour bus, Holly chartered a four-person plane to take himself, Jennings, and Tommy Allsup from Clear Lake, Iowa to Mason City, Iowa.

This was taken January 1959 before Waylon Jennings gave up seat on Buddy Holly's doomed plane 55 years ago next week: pic.twitter.com/mwF7TyYHIy

Jennings gave up his seat to J.P. Richardson, known as The Big Bopper, because he had the flu, and Allsup lost a coin toss and gave up his sat to Ritchie Valens. As history would have it, around 1 AM on February 3, 1959, the plane crashed, killing everyone on board.

Right before the plane took off, Jennings and Holly exchanged some words that were supposed to be in jest, but haunted the outlaw singer for many years. Holly told Jennings, “I hope your ol’ bus freezes up,” and Jennings responded, “Well, I hope your ol’ plane crashes.”

A little over a year after Buddy Holly passed away, Jennings and his then-wife Maxine welcomed a son, who they named Buddy Dean Jennings. Like all of Waylon’s other children, Buddy has been a champion at keeping his father’s legacy alive through photos on social media and at tribute events as well as various concerts. Not to mention, he is his father’s spitting image.

He is often spotted at his brother Shooter’s shows, rocking any and all Jennings family merchandise.

It seems that he was in need of his family’s support recently, as it was announced that he received a heart transplant on June 18 at Vanderbilt Hospital in Nashville, Tennessee. Many members of the Jennings family announced the news by sharing a YouTube video from Vanderbilt promoting their work with heart transplants.

Shooter wrote on Twitter, “My brother, Buddy Jennings, received a heart transplant 10 days ago and is doing very well – lost of amazing things going on at Vanderbilt! #superbud”

My brother, Buddy Jennings, received a heart transplant @VUMChealth 10 days ago and is doing very well – lots of amazing things going on at Vanderbilt!#superbud https://t.co/p7LTyE9u4C

Waylon’s widow, and the woman Buddy seems to consider his mom based on his Facebook posts, Jessi Colter, also updated her fans on how Buddy was doing.

We will keep Buddy in our prayers as he recovers from the heart transplant!