Why Fans Think Carrie Underwood Is Hiding Behind A Mask

By Manly Bryant on January 7, 2019
Advertisement 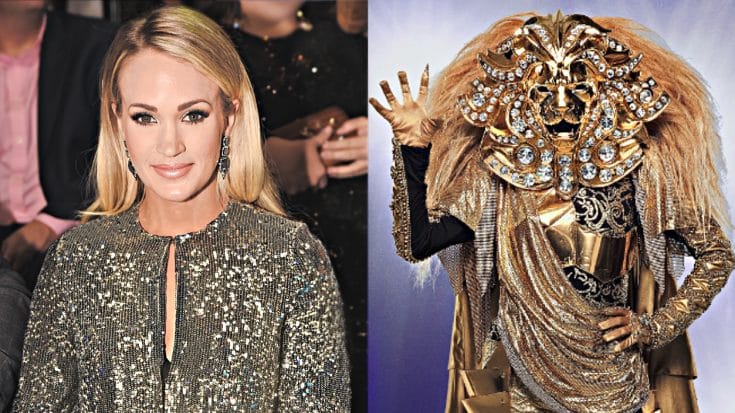 Fox’s The Masked Singer has been called one of the strangest new T.V. shows to come out in recent years – but people absolutely love it. Now, fans are claiming that Carrie Underwood herself might be one of the masked singers…but what are the facts?

What Is The Masked Singer All About

The show is based on some not-so-simple detective work. In a musical mystery, fans and judges are left to figure out one big question: “who’s behind the mask?” But it is not so simple. Some of the masked singers already have musical careers while others might be athletes or other celebrities who have made their name in a different way.

Such was the case for “Hippo” who was actually Antonio Brown from the Pittsburg Steelers. Right away, the celebrity panel knew right away he was an athlete! But there have been a few singers that are award-winning artists – and some fans are dead set on the idea one, in particular, is the country mega-star, Carrie Underwood.

Is The Lion Carrie Underwood?

So far, The Lion has performed two songs and everyone is taking wild guesses about who might be underneath the golden mane…

For the first episode, The Lion sang “A Little Party Never Killed Nobody” by Fergie while strutting her stuff on stage – bringing the celebrity panel and fans to their feet. Ken Jeong even stated that he “thinks this is the most famous of all the contestants.”

Another video of The Lion singing “California Dreamin” by The Mamas and The Papas was released and the celebrity panel agreed – it has to be a singer.

With that, fans took to social media to voice their opinions on who The Lion might be. While many believe it might be Lady Gaga – Carrie Underwood has been put in the running as a possible contender under the mask.

One Reddit user said, “My money is on Carrie Underwood.”

And many agree. Some even went as far as researching who the costume designers on the show have worked with in the past.

Then I went to her Instagram and found this picture. Did you peek at the caption? ? #TheGoldenQUEEN pic.twitter.com/RJF3HUNssT

While this is an interesting connection the designer, Marina Toybina, has also worked with female artists and groups such as Vanessa Hudgens, Katy Perry, Taylor Swift, and Shania Twain – so it could just be a coincidence.

Still, fans want to make the connection. Carrie would have been pregnant when the show first started filming and one fan believes Carrie found out the news while working on the set. He said, “Why would they show Lion Mask smoking and drinking?!” he questioned. “And then I remembered the staff member whispering to Lion Mask in the YouTube week one hint… Lion Mask was being notified that she was pregnant!”

It had to be a coincidence, right? Plus @carrieunderwood was pregnant in June (recording time) why would they show #LionMask smoking and drinking?! And then I remembered the staff member whispering to #LionMask in the YouTube week one hint… pic.twitter.com/ESwzZuU8Oi

Continuing to make connections, the fan explains that they believe The Lion was chosen for its “metaphorical expression(bravery&courage) to describe Carrie’s overcoming of her recent struggles” which would include her surgery after a scary fall and her difficult miscarriages.

The #LionMask is @carrieunderwood I did way too much, but the only reasoning behind the selecting a lion would be for its metaphorical expression(bravery&courage) to describe Carrie’s overcoming of her recent struggles pic.twitter.com/lDBK1Zc3W8

One Thing Doesn’t Add Up

While it might all see a little convincing, The Lion gave the clues that they are “Hollywood royalty” and want to prove themselves as a singer. Carrie Underwood resides in Nashville with her husband Mike Fisher and their son Isaiah – and she’s pretty much already proved herself.

Coming from a small town in Oklahoma – the singer competed in and won season 4 of American Idol. So why would she go through it all again? Seriously, just check out the compilation of her Idol performances in the video below and y’all will agree – there is nothing left to prove.