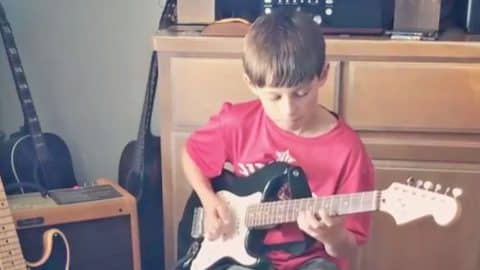 There are a few guitar riffs in the classic rock world that every music fan will recognize – no matter what genre you regularly listen to. Some that come to mind are Guns ‘N Roses’ “Sweet Child O’ Mine,” Lynyrd Skynyrd’s “Sweet Home Alabama,” and quite a few AC/DC songs.

One of those AC/DC songs is called “Thunderstruck,” their lead single on the 1990 album The Razors Edge. The song peaked at number five on the US Billboard Hot Mainstream Rock Tracks, and reached the Top 5 in Australia, Belgium, Finland, Ireland, Netherlands, New Zealand, and Spain.

In 2010, “Thunderstruck” topped the radio network Triple M’s Ultimate 500 Rock Countdown in Melbourne, Australia, and since it has become available for digital download, it has sold over a million copies.

The opening guitar riff on “Thunderstruck” is extremely intricate and the legendary Angus Young just makes it look like a walk in the park – when we know for a fact that it’s not! Many, many musicians have tried their hand at perfecting this famous riff – from young novices all the way to season professionals!

One fan who has practiced this riff over and over again is country star Aaron Watson‘s 12-year-old son, Jake. Watson, a country singer known for his traditional sound, was working on some songs in his office when his son walked in and said, “Dad, check this out!”

Jake proceeded to play the famous opening to “Thunderstruck,” and Watson was so proud, he had to film it and share it with his 400,000+ fans on Facebook.

The rock world better watch out, because Jake Watson is comin’ for ya! Watch his incredible video below.

YOUVE BEEN THUNDERSTUCK!Working on some new songs when this little stud walks into my office and says, “Dad, check this out!” Have a blessed Sunday!!!!! Xo