ACM Announces Winner For Music Event Of The Year

By Manly Bryant on April 7, 2019
Advertisement 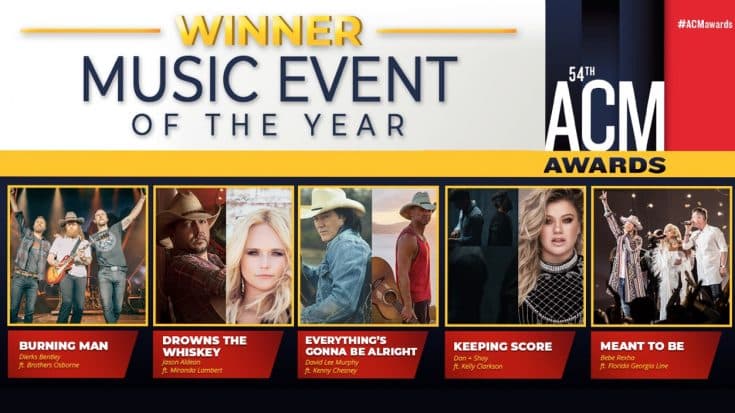 Congratulations are in order for some of the biggest acts in country music – and they didn’t stop at just honoring one this year!

In the hours just before the 54th Annual ACM Awards in Las Vegas, the folks at the top slipped out a few awards and winners ahead of the big show getting started – and we are here to share them all with you!

Nominated for the 2019 ACM Awards’ “Music Event Of The Year” were a bunch of talented folks who took to the stage to share a very special moment. Check out all the nominees below!

Revealed just before they officially kicked off the red carpet outside of T-Mobile Arena off the strip in Las Vegas, The ACM Awards announced the official winner of the 2019 Music Event Of The Year – an award designed to honor incredible work for a live collaborative performance during the entry months.

The first award of the night has been handed out! Congratulations Dierks Bentley & Brothers Osborne ???#MusicalEventOfTheYear #ACMawards

Congratulations are most definitely in order for the winners: Dierks Bentley and Brothers Osborne!

We couldn’t be happier for them! Check out their incredible performance LIVE from the CMA Awards last year in the video below!