By Jennifer Pernicano on April 20, 2022
Advertisement 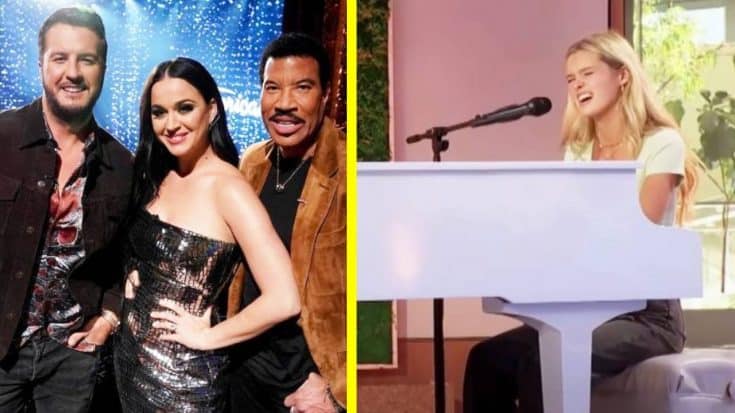 Fans of American Idol first met singer Kenedi Anderson during the March 6th episode of the show. She auditioned with a cover of Lady Gaga’s “Applause” while accompanying herself on the piano.

Almost immediately, judges Katy Perry, Luke Bryan, and Lionel Richie knew they had found someone very special. Perry said she “checked every box” while Bryan said she “might be the biggest star we’ve ever had.”

They unanimously agreed that she earned herself of of this season’s coveted Platinum tickets, which goes to one artist in each city, allowing them to skip the first round of Hollywood Week, and the ability to hand-pick their duet partner for the next round! She continued her winning streak during the duet round with a cover of Bill Withers’ “Lean On Me.”

After Hollywood Week, the advancing contestants travel to Disney Aulani Resort in Hawai’i as part of the Top 24. Anderson was mentored by pop-star Bebe Rexha for her performance of Christina Perri’s “Human.” She even received a FaceTime from Perri herself! Her delivery of the song was incredible and showed that she had potential to win the entire show. Normally, after the performances, they show the judges’ critiques and praises, but instead it cut to footage of host Ryan Seacrest in his radio studio.

“You might have noticed that there was no voting information during Kenedi’s performance just now. Since we taped these shows in Hawaii earlier, Kenedi has decided to withdraw from our show for personal reasons,” he explained. “We send her our well-wishes, and needless to say, we have incredible talent on this historic season, with more iconic Idol performance coming up for you right now.”

Shortly after this aired on ABC, Kenedi, 17, took to her official Instagram to give further clarity.

“For personal reasons, I’m unable to continue on American Idol,” the post read. “This has been one of the hardest decisions I’ve ever had to make, but I know it’s necessary. I’m so grateful to American Idol, the judges, the producers, the amazing contestants, and all the fans who have supported me.”

See her full statement below.

On Monday night (April 18), American Idol held an epic 20th Anniversary party at Desert Five Spot’s rooftop bar and lounge. USA Today was there and spoke with judges Lionel Richie, Katy Perry, and Luke Bryan. One of the topics they asked the three judges about was the mysterious dropout of Kenedi Anderson.

“We were heartbroken,” Richie told the publication. He also stated that her potential “was unbelievable.”

Perry added that Anderson dropping out has made the other contestants step up in a way they may not have been able to if she was still competing.

“I mean, look, she was a great one, but I do think that we have such incredible other voices that have now even stepped forward a little bit more,” Perry said. “It’s just really another opportunity for one of these incredible contestants, and we wish nothing but the best for her. … I say #GBHOJ: God bless her on her journey. Oh, I missed an H. But you know what I’m saying.”

Bryan echoed his fellow judges, and said they “wish nothing but the best” for Anderson.

He also said, “These kids, they got a lot coming at ’em. I think, potentially for her career, her being a part of our family is as good as the route or the way to the top can be. But, if you’re having doubts and anxieties and other things …we’re heartbroken as a show because she was so dynamic and great.”