Bear Falls Onto Police Car, Then Causes Fire And Flees From Scene

By Manly Bryant on August 13, 2019
Advertisement 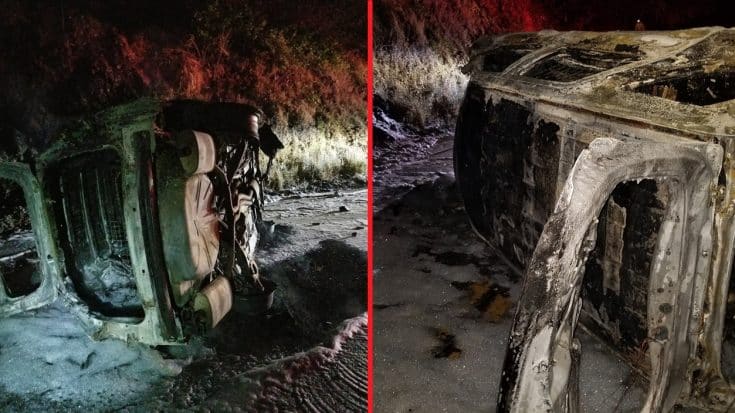 One of the wildest stories to hit the internet recently happened in Humboldt Country to a sheriff who was driving down Highway 96. He was responding to an overdose call he got and was on his way to the scene when a bear apparently jumped off an embankment onto his patrol vehicle.

CAUTION FALLING BEAR! A Humboldt County Sherriff’s patrol vehicle was struck by a falling bear while traveling north on…

The vehicle spun out of control and hit the embankment and immediately burst into flames catching the whole car and road on fire. The deputy was, fortunately, able to get out and wasn’t seriously injured by the crash or the flames.

However, the fire started to spread and ended up catching a half an acre on fire, meanwhile, the bear got up and fleed the scene. Luckily, fire trucks were called to come put out the flames before they could spread further.

Caltrans District 1 posted the pictures to Facebook saying, “CAUTION FALLING BEAR! A Humboldt County Sherriff’s patrol vehicle was struck by a falling bear while traveling north on Highway 96 last week. The vehicle caught fire after striking an embankment and the deputy escaped the vehicle without serious injury. Don’t worry, the bear also fled the scene.”

How Did This Really Happen?

We’re just curious how this all really happened. Did the bear really fall off the embankment at the exact moment the patrol vehicle was driving past or was it running from something just trying to cross the street and happened to fall onto the deputy’s car?

We may never know but it’s crazy how a bear fell onto a decent-sized vehicle causing it to crash and burn to a crisp.