By Miranda Raye on March 1, 2022
Advertisement 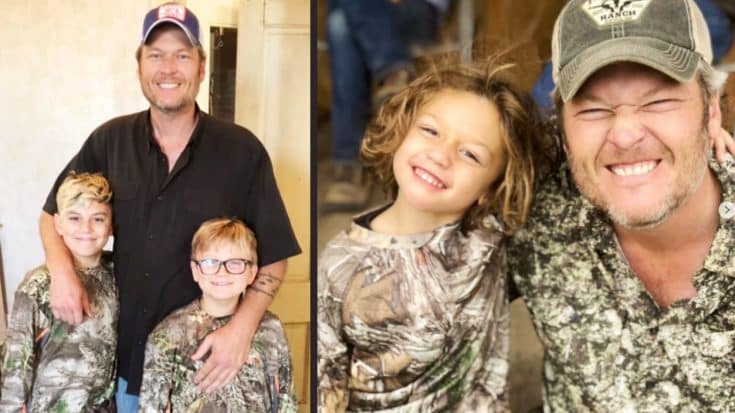 When Blake Shelton married Gwen Stefani on July 3, 2021, he became a stepdad to her three sons: Kingston, Zuma, and Apollo. Gwen shares the boys with her ex-husband, Gavin Rossdale.

Blake and Gwen began dating at the end of 2015. Just as Blake fell in love with Gwen, he found himself falling in love with her sons.

Country Countdown USA host Lou Helton sat down to interview Blake during the recent Country Radio Seminar. They talked about his career, his public image as the goofy country guy, and of course they made time to talk about his life with Gwen.

During the chat, Blake revealed that Gwen was hesitant in the early days of their relationship. She was worried he wouldn’t want to welcome her sons into his life.

“I think Gwen thought, when we first started seeing each other, that it was just gonna be a moment in time because of that,” Blake said.

But the opposite proved to be true. He welcomed Gwens’ boys without hesitation.

Blake opened up about his own father, who married his mom when she already had a baby. That baby was Blake’s older half-brother, Richie, who passed away in 1990.

Blake said his father set an example for him of what a stepdad is supposed to be like:

“He took Richie on and raised him from the time he was 1 year old, and my brother never thought of my dad as anything other than his dad,” Blake said. “The example that my dad set for me was that [a child] was not even a consideration [in a romantic partnership].”

So when it came to Gwen and her sons, Blake knew he could step up and be part of their lives since he witnessed his dad do so with Richie:

“You got three boys? Awesome! My dad did it. My dad raised me. I could do this. I didn’t know what I was signing up for, but I was all about signing up for it. And every day I’ve fallen in love with the boys as much as I do with Gwen.“

How sweet is that?

Look below to see Kingston and Zuma make an appearance in the music video for Blake’s 2017 single “I’ll Name the Dogs.” You can tell how much Blake cares about them and their younger brother Apollo.