By Tiffany Smithson Aaron on May 5, 2022
Advertisement 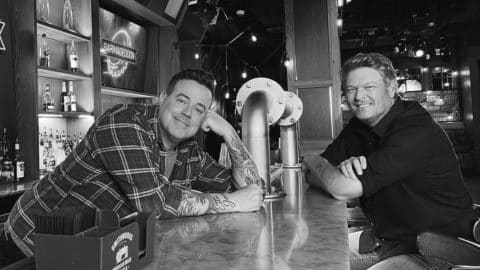 Blake Shelton has big news! The Voice coach announced Thursday that he has teamed up with his good friend Carson Daly for a new television show set in Shelton’s Nashville bar, Ole Red.

Daly made the announcement on the TODAY Show followed by a social media post from Blake Shelton confirming the news.

The friends teamed up to create Barmageddon, a celebrity game show that will air on USA Network. The pair will star in and executive produce the show and Nikki Bella will host.

Carson Daly will stay behind the bar while Shelton will join his house band on stage for music sing-alongs. Celebrity friends of the duo will face off in classic bar games, some with a unique twist, like Air Cannon Cornhole, Keg Curling, Drunken Axe Hole, Sharts (“Shelton Darts”) and more.

Barmageddon’s official description reads that in each episode two celebrities will go head-to-head in five bar games to win prizes for a viral internet sensation.

“Plucked from obscurity following their epic misadventures on the Internet, these now-infamous stars find themselves at Ole Red hoping to be redeemed. The competition heats up when the losing rival of each round has a chance to even the score by spinning the Wheel of Redemption, a risky move with hilarious consequences,” the description reads. “Shelton and Daly will offer words of encouragement – and heckling, of course – to their celebrity friends. On occasion, they might even step in to show off their skills and play a game or two.”

“Nashville is known for great music and hospitality, which makes it the perfect setting,” Shelton said in a statement. “I’m excited about Barmageddon and can’t wait for friends, old and new, to join my buddy Carson and me for some drinks, music and high-spirited fun at Ole Red.”

Barmageddon‘s premiere date is yet to be announced.