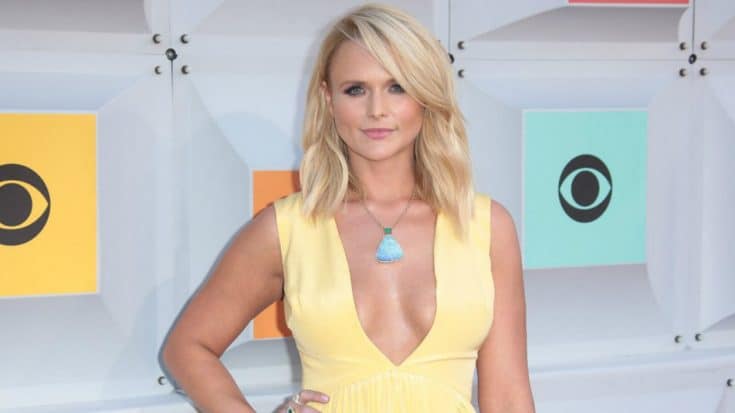 Miranda Lambert was the talk of the Academy of Country Music Awards. The country cutie made headlines earlier in the week after making a surprise appearance at the Carrie Underwood-hosted ACM Women of Country Night where the two performed their award-winning duet “Somethin’ Bad.”

Lambert made headlines again when she and her new beau, Anderson East, made their red carpet debut prior to the ACM Awards show. All eyes were on Lambert as she strutter her stuff on the carpet in a yellow Christian Siriano gown. But, it’s what the “Kerosene” singer was wearing on her feet that had everyone talking as the singer took the term “packing heat” to a whole new level.

Lambert showed off a pair of bright pink $829 stilettos that featured a gun and holster embellishment. The “Come And Take It” design was created by Houston-based Joyce Echols and is available in black, red, and pink. An Instagram user shared a close-up photo of the impressive heels.

Echols was thrilled to see her design on Miranda Lambert and told Footwear News about how it came about.

Echols met Lambert’s long-time stylist Tiffany Gifford, and the two knew instantly that the collection would be perfect for Lambert.

“We were so excited to see our collection on the ACM Award’s red carpet. We are huge fans of both Miranda and Tiffany,” Echols told FN. “My fellow Texan, Miranda, embodies the right amount southern sass for our ‘Come and Take It’ shoe. She wears it well.”

If you’d like a pair of these impressive heels, you better act quick! According to the designer’s website the Miranda’s pink design is selling fast! Click here to check them out.