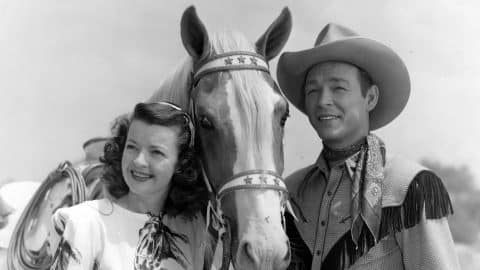 Long before there were Garth and Trisha or Tim and Faith, there was Roy and Dale. Roy Rogers and Dale Evans-Rogers were, and continue to be, one of the most talented and beloved couples to ever grace a stage.

Prior to becoming a popular husband-wife team, Roy and Dale were successful in their own right as actors and singers. But, when the duo met on the set of The Cowboy and the Senorita in 1944, one of Hollywood’s most popular pairings was born. Both were married at the time of their first meeting, but Roy would lose his wife to complications from childbirth just one year after Dale divorced her second husband. The couple married in 1947 and went on to co-star in more than two dozen films as well as the 1950’s television show The Roy Rogers Show.

The show, which ran from 1951 to 1957 became best known for its closing theme song “Happy Trails To You” which Dale Evans-Rogers wrote. Dale, feeling strongly that Roy needed a theme song, penned the tune less than an hour before Roy and his band were set to perform on a live radio show. Evans-Rogers’ inspiration for the song came from Roy’s infamous autograph in which he wrote “Trails of Happiness” or “Happy Trails, Roy Rogers.”

King of the Cowboys.Roy and Dale leave the train for a special function.Restored and Coloured byPaul Willetts Crowley / Skyarc(C)2017.

Posted by Skyarc Digital Arts and Design. on Friday, November 17, 2017

Dale quickly scribbled the lyrics on an envelope and taught the medley to Roy and his band with only forty minutes to spare. Roy and The Sons of the Pioneers sang “Happy Trails To You” for the first time that night and it soon became Roy Rogers’ signature song.

Both Roy Rogers and Dale Evans-Rogers had a profound impact on the country music community. To this day, Roy is the only Country Music Hall of Fame member to be inducted twice. He was first inducted as a member of the Sons of the Pioneers in 1980, and again as a soloist in 1988. In 2002, Evans-Rogers was named one of the 40 Greatest Women in Country Music.

Over the years, “Happy Trails” has become a theme song of sorts for cowboys and cowgirls alike. It’s no wonder as the tune’s simple and uplifting lyrics resonate with anyone who hears the song. With phrases such as “Who cares about the clouds when we’re together? Just sing a song and bring the sunny weather,” it’s impossible not to smile and sing along.