‘The Voice’ Front-Runner Performs On Star Search At Age 5 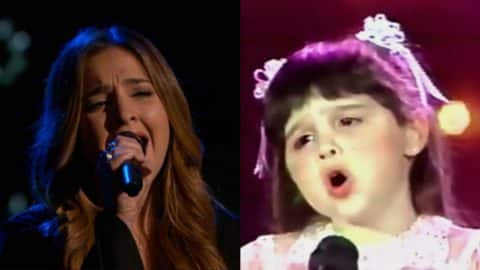 Alisan Porter’s stunning The Voice season 10 blind audition performance of Linda Ronstadt’s “Blue Bayou” gave the former child star instant front-runner status. The “Curly Sue” actress isn’t quite sure what to think of the title and admits that it adds a whole new element to the competition.

“It is crazy pressure,” Alisan admitted. “But it is incredible to hear that people are saying [I’m a front-runner] and I think it’s my job to push forward and continue to stay on that ladder as long as I can.”

But, the pressure isn’t anything new to Top 12 contestant and member of Team Christina. The former child star appeared on the iconic ’80s talent competition Star Search and became the youngest person to ever win the show. Week after week the then-five year old Porter wowed the audience with her voice and stage presence as she tackled tunes such as “Over The Rainbow” and “When You Wish Upon A Star”.

Porter’s appearance on The Voice is like deja vu for those who remember seeing her on Star Search. She may not be Team Blake or sing country music, but there is no doubt that Alisan Porter has us looking forward to watching The Voice every week. The 34-year old mom of two has big plans regardless of whether she gets that Voice title to go along with her Star Search trophy.

“I think the biggest goal is to stay on the map!” she explained. “I don’t want to use this and then disappear. I want to make a record immediately after this, the second I am done, whether I win or get voted off next week. I just want to be here and write songs and be in the music business and do shows and do what I love.”

Watch the video of an adorable 5-year old Porter sing “When You Wish Upon A Star” in the video below.