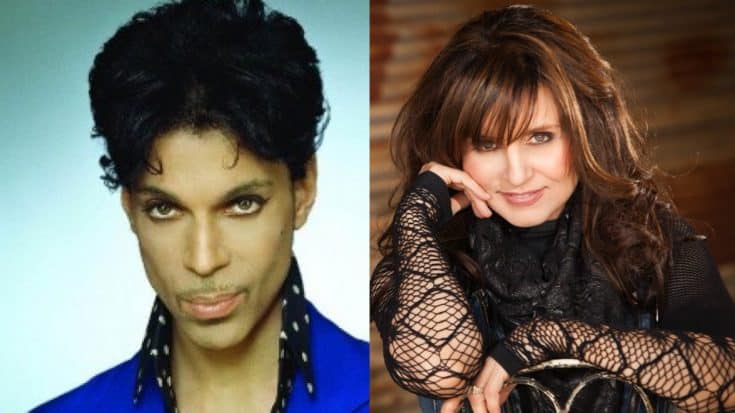 The music world was shaken once again last week as the news of Prince’s death was announced. But, for one country singer the news was especially tragic.

’80s hit-maker and Grammy nominated singer Deborah Allen was one of the few country artists who had the honor of having Prince as a friend and a collaborator. Allen, who is best known for her Top Five crossover hit “Baby I Lied”, recalls meeting Prince for the first time when both were working on separate projects at L.A.’s Sunset Sound Studios.

She ran into the star again awhile later when her record label showed up to listen to the progress on her new album. Wanting to avoid the awkwardness of watching them listen, Allen slipped out of the studio for some coffee.

“I decided I’d go get some coffee while they were listening to my album. So, I had a couple of coffees in my hand and there’s Prince playing basketball in his blue silk bell-bottoms, blue silk shirt and platform shoes. I’m standing there beside him, watching him shoot baskets and I say, ‘Well, that was a good one.’ Then I go, ‘I like your outfit.’ He says, ‘Likewise.’ That’s all we said to each other. We acknowledged each other then we went on.”

Deborah Allen returned to Nashville knowing that she needed something big to make her new album a guaranteed success. She came up with the idea to ask Prince to contribute to the project.

“I wrote him this letter: ‘Dear Prince, You may not remember me, but I’m Deborah Allen and we met by the basketball court. The new RCA executives like my album but they want me to do a couple more cuts. I was wondering if you’d be interested in writing, co-writing, and/or producing something on me. That would be merely wonderful.'”

Less than a week later, Allen received the response she had been hoping for. Not only did Prince agree to help her out, but he had taken the time to write a song just for her. Prince sent all the tracks, she recorded the vocals then returned them to Prince who overdubbed the saxophone part. ‘Telepathy’ would go on to become the title track for Allen’s album. But, the story doesn’t stop there.

Awhile later, Allen was in Los Angeles and took the time to visit Prince who then invited her to attend a birthday party for a dear friend of his.

“That was a fairytale unto itself,” Allen says. “Everybody was there. I was dressed really exotic that night. We drive up and I get out of my limo, Prince gets out of his Rolls Royce. I knew his driver, so I said, ‘Hey, Sam.’ I didn’t want to go in by myself so I asked my driver, Bernard, to accompany me. Prince walks up to me and says, ‘Come. You go with us.'”

The event made for some special memories for Allen, but one stands out above the rest.

Deborah Allen had hoped to reconnect with Prince at some point, but now she will have to cling to the wonderful memories she has of the star.

“The time I spent with Prince was magical.  He was truly a musical genius!  To be in his presence was exhilarating and inspiring. Yet, he was just so down to earth and real at the same time.  He treated me like a princess and with the utmost respect. He was such a gift to us all,” Allen told Country Rebel. “I treasure every second I spent with him.  I still have the hand written lyrics he gave to me of our song, and the beautiful Christmas card he sent to me which simply stated, “Love God”… Which I know he did. He was a loving person and a very spiritual being. I know he is at home in Heaven right now. I will love him forever.”