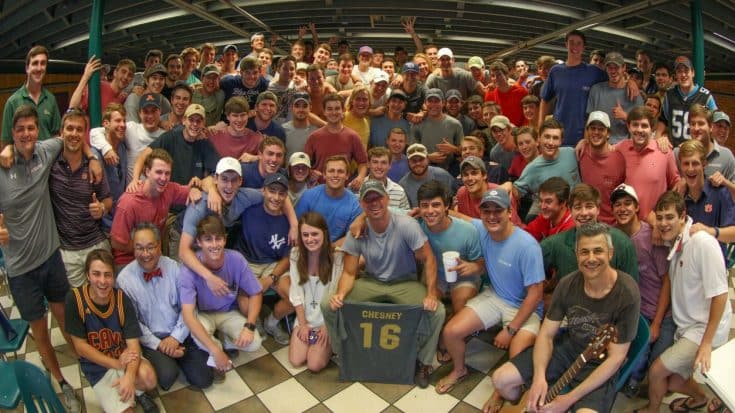 When the brothers of Lambda Chi Alpha heard that Kenny Chesney was kicking off his “Spread The Love” tour at Auburn University’s Jordan-Hare Stadium, they extended an invitation for the star to visit their fraternity house while he was in town. Much to their surprise, Chesney took them up on the offer.

Chesney, an alumni of East Tennessee State University Lambda Chi, didn’t officially accept the invitation until shortly before he arrived at the frat house. But, the brothers were ready for him and said that the impromptu mini-concert was “laid-back, almost like a family atmosphere.”

During his 20-minute visit, Chesney sang two songs including “Keg in the Closet,” a song he wrote about his time in the fraternity.

“You know, some things don’t change,” Chesney said in a Facebook post. “Friday afternoon at a fraternity is still an awesome place to be.”

Before leaving, the “American Kids” singer took a quick tour of the house, posed for photos and signed autographs before word spread about his location.

Watch Kenny Chesney sing “Keg In The Closet” at Lambda Chi Alpha in the video below.