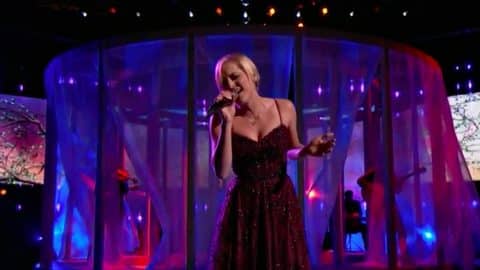 With only eight hopefuls left on Season 10 of ‘The Voice’ and only four spots available in next week’s semi-finals, Monday night’s episode delivered some of the season’s best performances.  One of our favorites of the night came from Team Blake‘s Mary Sarah.

The 20-year old took the stage, accompanied only by a piano, and delivered a sultry rendition of Randy Travis and Carrie Underwood’s hit “I Told You So”. Travis wrote and recorded the tune in 1988 for his Always & Forever album and took it to the top of the country singles chart.

In 2007, Carrie Underwood covered the song for her album Carnival Ride. She then re-recorded and re-released the tune as a duet with Randy Travis. The collaboration peaked at number two on the country charts in 2009.

We’re sure that Mary Sarah made Randy Travis proud with her cover of “I Told You So”, but will it be enough to secure her a spot in the top four? We’ll find out tomorrow night!

Listen to Mary Sarah sing “I Told You So” below.