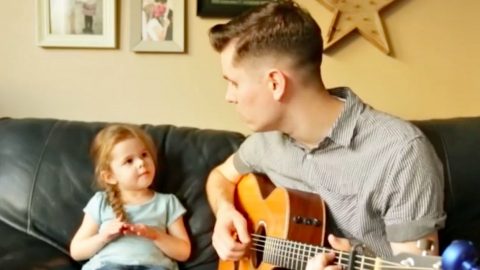 If you’ve never seen a video of Claire Ryann singing, you’ve been missing out! The 4-year old internet sensation made her first YouTube appearance at the ripe old age of three when she sang “Part of Your World” from Disney’s The Little Mermaid. More than 11 million views later, and Claire and her family have gained quite a following.

Claire is the daughter of college sweethearts, Dave and Ashley Crosby, who married when Dave was 22 and Ashley was almost 19. The couple is now based in Seattle, Washington, where they live with Claire and their son, Carson.

Dave told Parents.com that he knew early on that Claire was going to be able to sing.

“Claire learned to talk at a super young age and we noticed really early on that she could carry a pitch,” Dave said. “I remember some time after her first birthday, she was slamming her hands on our little keyboard in the living room. She started hitting the same note over and over, and then she began to sing the exact same note. I was sure at that moment that she was going to be able to sing.”

Claire’s parents then introduced her to Disney songs, which eventually led to the making of her first official YouTube video. Claire’s pitch perfect and heartfelt covers are so incredibly delightful to watch. Not only does she dress and act the parts as she sings, but many of her covers are Disney duets in which her dad joins her.

Clair and Dave’s latest Disney cover is a simple, impromptu video recorded in the family’s living room. No fancy costumes or sets. Just Dave, his guitar and Claire singing “You’ve Got A Friend In Me” from Toy Story. Check out the video below. We’re pretty sure it’s the cutest thing you’ll see all day.