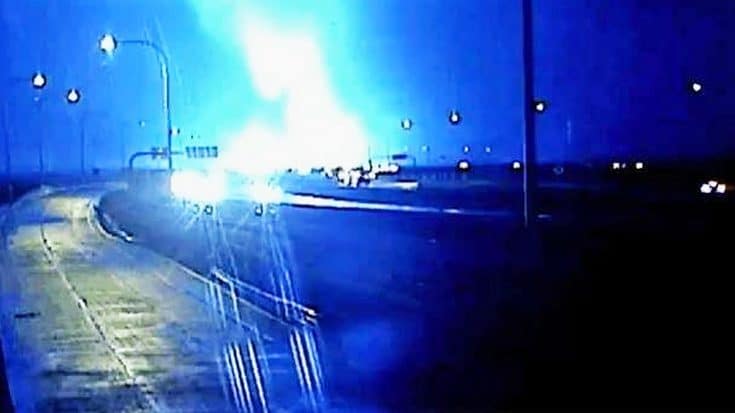 Nearly two weeks after a tornado touched down in Garland, Texas the North Texas Tollway Authority has released some terrifying video footage of the storm.

The tornado, which touched down in Garland the day after Christmas, was given an EF-4 rating, meaning that the twister was extremely violent. EF-4 tornados are also rare, occurring with a relative frequency of only 0.7%.

EF-4 tornados cause extreme damage, and even well-constructed homes can be completely leveled by the storm. The tornado in Garland had winds of nearly 200 miles an hour, and the Dallas Morning News states that 8 people were killed.

The Garland tornado passed over the busy Bush Turnpike-Interstate 30 intersection, and five NTTA cameras picked up some shocking footage from that moment.

At the start of the clip, everything seems fairly calm. But before long, the winds pick up and then the twister comes into view. Around the 0:45 second mark on the clip, the tornado passes over the highway and starts hurling cars into the air.

Even the Garland Police Department spokesman Pedro Barineu admitted the storm was scary, telling the Dallas Morning News that he thought it was “terrifying.”

We’d have to agree with Barineu, it definitely looks like it was terrifying!

Our thoughts and prayers go out to the people of Garland, and to the families of those killed in the storm.

Stunning footage of the Garland tornado (12/26/15) captured by NTTA cameras near the George Bush Turnpike.