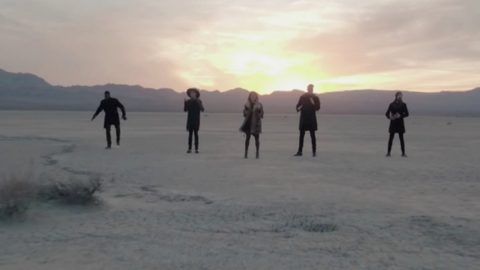 It’s never too early to start thinking about Christmas, and there’s nothing like holiday music to get you in the spirit….especially if it’s new music from a cappella group Pentatonix.

Yesterday (October 21), the Grammy Award winning group and season 3 winners of NBC’s The Sing Off released the first song from their upcoming Christmas album, A Pentatonix Christmas. The video for the single, “Hallelujah,” has surpassed 2 million views in less than 24 hours. If the powerful cover is any indication, the quintet’s new holiday album may very well see the success of the group’s 2014 Christmas album, That’s Christmas To Me, which was certified double platinum.

The release of Pentatonix’s video for “Hallelujah” comes just a month after the group released a popular cover of Dolly Parton‘s hit “Jolene.” Parton herself appeared in the video with the group singing lead while the quintet sang back-up.

“Singing with [Pentatonix] was pure magic,” Parton tweeted of the video. “And we had lots of fun rearranging the song!”

For Pentatonix, the experience was “a dream come true.” The group responded to Dolly saying, “It was magical singing with YOU!! We will never forget it!”

Watch the moving video for Pentatonix’s latest cover, “Hallelujah,” below.