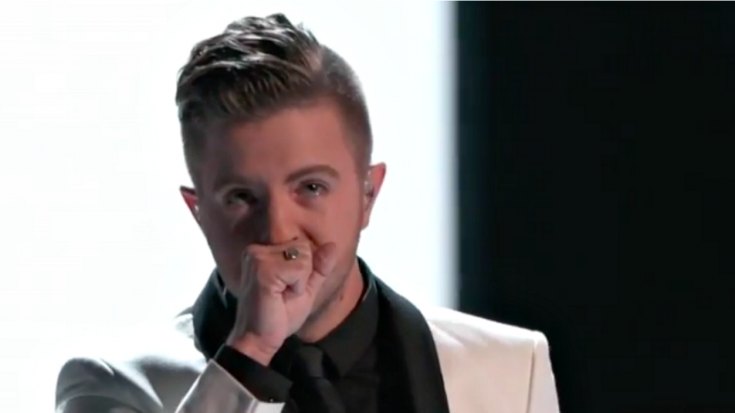 Season 11 of The Voice wraps tonight (December 13) on NBC, and this season’s front-runner, Billy Gilman, took to the stage Monday night to remind us again why all eyes have been on him this season.

Team Adam’s Billy Gilman opened night one of the finale with an emotional and heart-rending rendition of Frank Sinatra’s 1969 hit “My Way.” Dressed in a white tuxedo and standing on a white runway, Gilman sang his heart out as he delivered the moving lyrics in a way that only he can, reminding us once again why he deserves to own The Voice title.

At various moments throughout his performance, Gilman looked teary-eyes. But, it was the song’s conclusion that brought the audience to tears as he broke down and merely whispered the final words, “Yes, it was my way.”

“How do you not feel like you just won The Voice?” Levine added.

The 28-year old former child country star and Grammy nominee has been under some scrutiny this year from ‘Voice’ fans who feel like he’s already had his chance. Gilman posted a heartfelt note to Facebook prior to Monday night’s performance and addressed those critical of his second chance.

“The Voice has enabled such an amazing 2nd chance for me. Even though it’s the finale of the season, the love, the friendships, the success, and the new found joy has just begun!

I know there has been some chatter about me not being worthy of this second chance seeing I had some sort of success some 17 years ago. All I can say is I hope the people pointing fingers never find themselves or the ones they hold dearest in a situation like mine and find people saying they’re not worthy of a second chance. I pray for them.”

Gilman is one of four remaining finalists on the NBC hit reality show. A winner will be crowned Tuesday night after a star-studded finale show including performances from John Legend, The Weeknd, Kelly Clarkson and more.

Watch Billy Gilman’s moving performance of Frank Sinatra’s “My Way” below and tune in to NBC tonight to see the crowning of a new Voice champion.