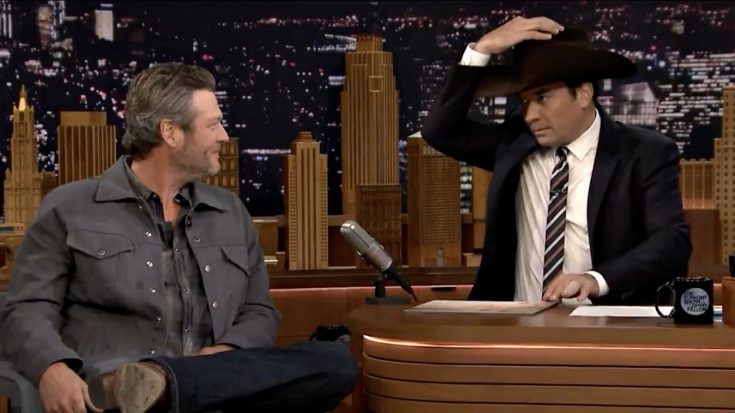 With less than a week to go until Blake Shelton releases his new album, Texoma Shore, the country star’s media tour is in full swing. Monday night (October 30) Shelton stopped by The Tonight Show Starring Jimmy Fallon for what was supposed to be an interview, but instead seemed to turn into a roasting of Shelton.

Blake’s visits to Fallon always result in some great laughs, and Monday’s visit was no exception. During the interview segment, the talk show host teased Shelton about his new album cover which features the singer standing on a shore near a small boat. Fallon questioned what was going through Blake’s mind as the photo was being taken.

“Are you thinking about growing up on Texoma shore? Young little Blakey, running around with his short shorts on,” Fallon teased. “‘Ma? Pa? I’m here. Am I late for dinner?'” As Blake fought back laughter, Fallon continued by mocking a conversation he imagined Blake and his parents may have had when he was little.

The two conversed about Shelton’s 2018 tour as well as his new restaurant and bar in Tishomingo, Oklahoma, before Fallon decided to prove his love for Blake’s music by donning a cowboy hat and serenading the singer with a cover of “I’ll Name the Dogs,” Blake’s new single.

In true Jimmy Fallon fashion, the vocals were spot-on and the song delivery was epic.