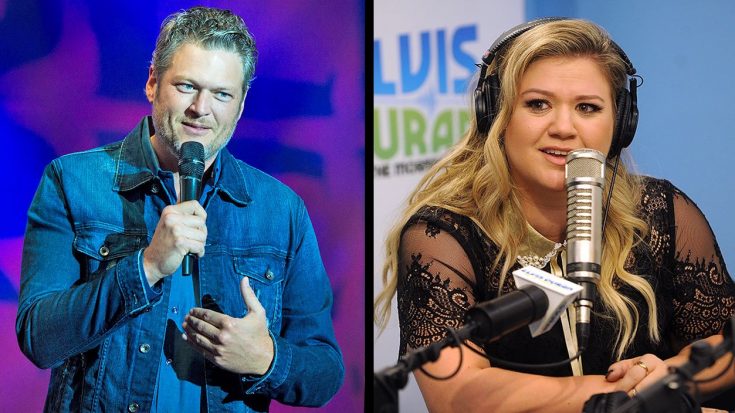 Pop sensation Kelly Clarkson was being honored with an award from Variety magazine, so she asked her good friend, country star Blake Shelton, to present her with the Variety Power of Woman honors.

They’ve known each other for about ten years, so he had quite a few stories to tell the audience about their friendship. During his speech, he brought up her joining him as a coach on the 14th season of The Voice.

“I got to thinkin’ about what Kelly’s gonna be like as a coach on ‘The Voice.’ I can talk about that because I know what she’s like as a coach,” he revealed.

He told a story about when her song “Don’t You Wanna Stay” with Jason Aldean came out a number of years ago, and she came to a lot of his concerts. They decided that Shelton was going to learn Aldean’s part and Clarkson would come out and surprise the crowd.

“I remember after the first time I did it, I thought, ‘Wow! People just freaked out! That was so cool!’” he said to the audience.

Clarkson didn’t agree. In fact, she seemed a little underwhelmed by the performance. They continued to perform the duet a few more times at Shelton’s shows, each time he thought it was great and Clarkson, again, felt it wasn’t up to par.

At her April 2012 concert in Los Angeles, the American Idol winner invited the “I’ll Name The Dogs” singer to perform the duet one more time. Once again, the singers disagreed on how well it went.

Finally, after that performance, Shelton asked her what he should be doing differently. He felt he was hitting the notes and doing a pretty good job.

She sternly said to him, “I want you to sing the song like we’ve been f*cking!”

The audience immediately burst into laughter, shocked by the fact that Kelly Clarkson actually said this to him!

We wish there was a camera on Clarkson during the exact moment because we know she would be laughing out loud as well!