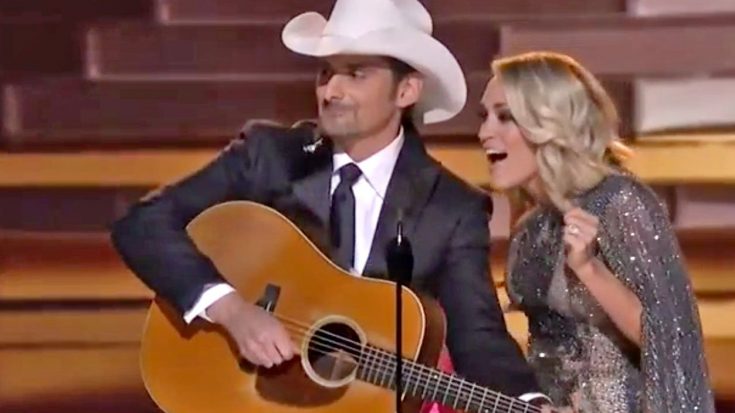 “Crooked Carrie!” Brad hollers at her during one of their political zings that take a page from the current election media we’ve all been seeing for some time.

As they laugh off the jokes and pull out some new comical props, it’s clear that they went all out for the 50th Annual CMA Awards – and spared no one in their effort to get a heartfelt belly laugh from everyone in the audience!

Just moments after they welcomed all the guests to the Bridgestone Arena in Nashville, Brad Paisley and Carrie Underwood segued into their traditional monologue filled with various barbs and jabs at some of their closest friends and country stars.

Carrie Underwood and Brad Paisley call out the election in the best way at the CMAs https://t.co/Gdviso9Lt5 pic.twitter.com/z7zcsoQRv3

“Everybody’s here at one time and one place,” Paisley finishes saying that all the legends are under one roof. “Wait, does that leave us vulnerable??” Carrie questions him.

“It’s okay, Carrie – we’ve thought of that! You see, right now, in a secret location – TOP SECRET!” He continued. “In the basement of the Grand Ole Opry we have our very own ‘designated survivor'”.

Carrie couldn’t hold her curiosity back, “I’ve gotta know: Who’s gonna fill our shoes if something happens to all of us?”

The crowd erupted into a fit of laughter that brought more than one tear to some eyes! The hilarious banter between the two only continued further as they poked more fun at the 2016 Presidential Election and even Peyton Manning – who happened to be sitting right in front of them!

Watch the full opening monologue between Brad and Carrie in the video below!