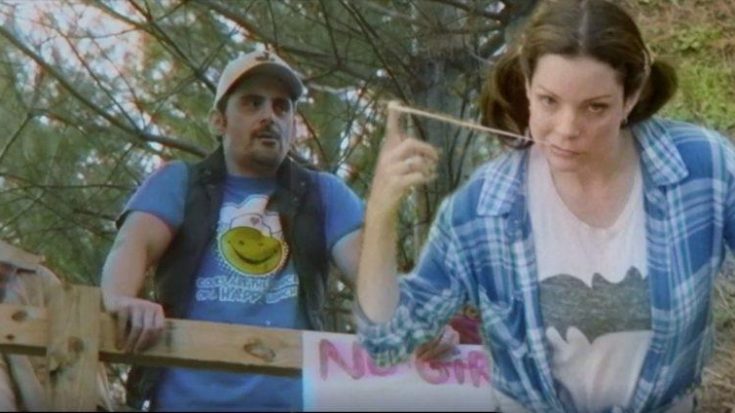 Country music star Brad Paisley teamed up with his bombshell and total comedian of a wife for a thrilling music video that had fans doubled over in laughter!

Making her debut in Paisley’s newest music video release for his song “Last Time For Everything”, Kimberly Williams-Paisley was a vision of cuteness and sass as her all-girl biker gang rolled up on Paisley’s tree house filled with all of his club members!

Sporting a sign that adamantly read “No girls allowed,” the rebellious girls sat below the boys’ hideout, taunting their rivals as Kimberly sassily popped her gum and gave Paisley a look filled with attitude!

The music video, compiled from a variety of outrageous scenes and events, took on a theme similar to the Netflix show “Stranger Things,” using filters and footage to achieve a keen likeness!

While Paisley’s song embodies the idea that we are unaware of what event or encounter could possibly be our last, his scenes with his real-life partner in crime had fans gushing over the loving couple!

As the song continues and transitions to various scenes and plots, the camera pans back to Kimberly and her rebellious friends as Paisley sings the heartwarming lyrics, “Kissing goodbye on her porch and driving away/ Introducing her as your fiancee/ Getting woke up at 5 am to see if Santa came/ There’s a last time for everything.”

We’re sure you’ll love this new video just as much as we do! You can check it out below and be sure to tell us what you think!

Here’s the video for my next single, “Last Time For Everything” available now when you pre-order my new album. This was a blast to film!! Hope you enjoy!