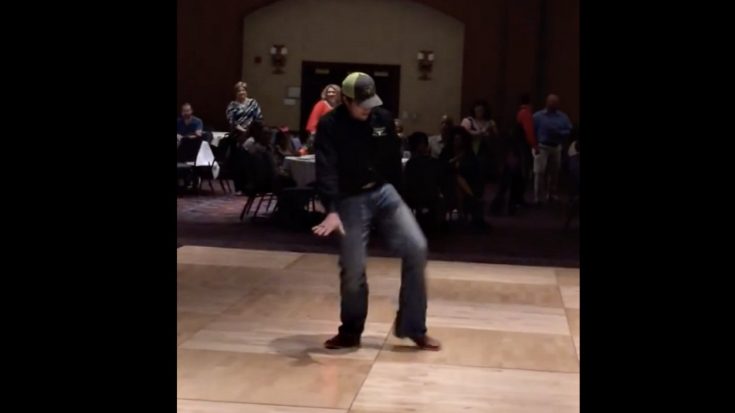 Line dancing fans, prepare to be amazed! A Louisiana-based deejay is taking line dancing to a whole new level.

Trevor Thompson, owner of Thompson’s Party Wagon DJ & Entertainment Services, is making a name for himself as a dancing deejay. Two years ago, Thompson became a viral star when a video of him dancing along to the infamous dance tune “Footloose” was posted online.

In the video, Thompson steps out of the deejay booth and hits the dance floor during a wedding reception and shows off his impressive moves with a drink in hand. Only one fellow dancer is brave enough to remain on the floor with Thompson as he dances circles around her….literally.

As Trevor Thompson, kicked, turned, clapped, and boogied, we found it almost impossible to sit still! Check out Thompson’s impressive dance moves in the video below!

“Footloose” has long been a dance party staple. Originally released by Kenny Loggins in 1984, it served as the main track on the soundtrack to the film of the same name. Actor Kevin Bacon was the first to dance to the iconic tune and it quickly became a party favorite.

In 2011, the Footloose was remade and country star Blake Shelton recorded the title track, causing a resurgence in the song’s popularity. Dancing With the Stars pro Julianne Hough starred in the countrified remake as the reverend’s rebellious daughter. It would seem that Hough would be a shoo-in for the part, considering her dancing background. But, she revealed in an interview prior the film’s release that it was a role she had to fight for.

While Hough is known as a professional dancer, she originally moved to Los Angeles to pursue acting.

“A lot of people don’t know that when I first moved out to L.A., it was to act, and Dancing with the Stars fell into place. I know everybody has discovered me as a dancer, but hopefully this will be the chance that I’ve been looking for, for people to see me as an actress,” Hough said of her Footloose role.

Watch Julianne Hough show off her Footloose moves in the official music video for Blake Shelton’s rendition of the title track below.