Carrie Underwood Joins Reba For Magical ‘Does He Love You’ Performance 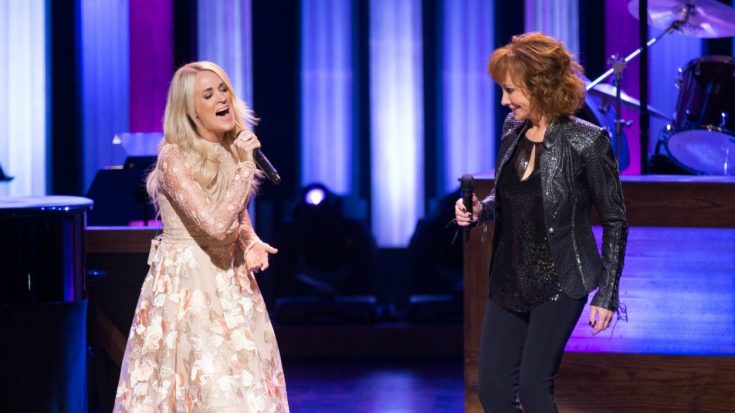 Friday night (September 22, 2017) was jam-packed with surprises for those in attendance at the Grand Ole Opry. In addition to the already impressive artist line-up that included Reba McEntire and Vince Gill, Dolly Parton and Carrie Underwood showed up to surprise Reba and help her celebrate the 40th anniversary of her Grand Ole Opry debut.

During the night’s second sold-out show, Reba began singing her 1993 hit song “Does He Love You,” originally performed alongside Linda Davis. Underwood casually walked onto the stage to sing the second part, much to the surprise and delight of the audience.

Underwood was obviously as thrilled about sharing the stage with McEntire as the audience was. The “Jesus, Take The Wheel” singer took to Instagram to share her excitement and photos of the memorable night.

“How is this my life?,” Underwood captioned a series of photos. “I got to be part of this crew celebrating @reba ‘s 40th anniversary of her first @opry appearance! Three legends…and me!!! So many dreams came true tonight!”

How is this my life? I got to be part of this crew celebrating @reba 's 40th anniversary of her first @opry appearance! Three legends…and me!!! So many dreams came true tonight! #OnlyAtTheOpry @dollyparton @vincegillofficial ❤️❤️❤️

Reba, Dolly Parton, Underwood, and Vince Gill were all smiles in another photo in which Underwood said, “Pretty sure we’re all besties now.”

Catch Carrie Underwood and Reba McEntire singing “Does He Love You” in the video below.