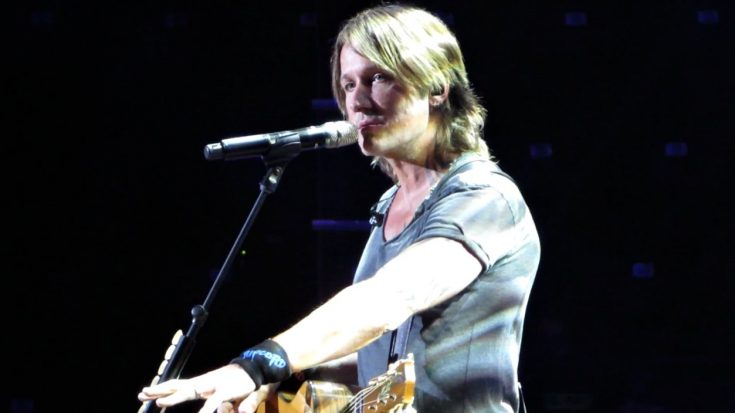 In 2012, Keith Urban was asked to write a song for Act of Valor, a movie based on real-life events of Navy SEALS. During concert this week, Urban had the opportunity to perform the song during the VetsAid concert in Fairfax, Virginia.

Luckily, the entire performance was recorded thanks to Debbie Grafton. It all started after Urban had called a former SEAL on stage. The pair exchanged pleasantries before the SEAL thanked Keith for all he does for veterans and their families.

“Keith, I really appreciate all you guys doing this stuff for our veterans, for all of us, but, of course, it’s all for our families,” the SEAL said as he pointed out his family in the crowd. “So my wife, my sister-in-law, my brother-in-law’s a vet as well, so we do it for them as well.”

Urban, obviously touched by the SEAL’s words, switched up his set list by inserting his song “For You” from the Act of Valor movie.

“We hadn’t planned on doing this, but it seems the perfect song for tonight,” Keith said as he grabbed his acoustic guitar. He then told the moving story behind the song.

“There’s an incredible scene in [Act of Valor] early on when, on this particular mission that the team was on…and it’s a real story…they came into this warehouse looking for the bad guys, and there’s this grenade that gets thrown into the room. The platoon is in there, and one guy from the platoon jumps on the grenade and saves all of his buddies.”

Keith continues by calling the gesture “the most extraordinary, indescribable act” and saying that it was the scene that took his breath away and inspired him to write “For You.”

“I said to my co-writer, Monty Powell, ‘We need to write the song from his perspective on how he felt the second he started ascending to heaven. What he would say if he could say anything.’”

Keith Urban then performed an acoustic rendition of “For You” that will chill you to the core with its haunting melody and moving lyrics.

Watch Keith’s touching performance of “For You” in the video below.